Robots in Development to Offer a Hand in the Kitchen 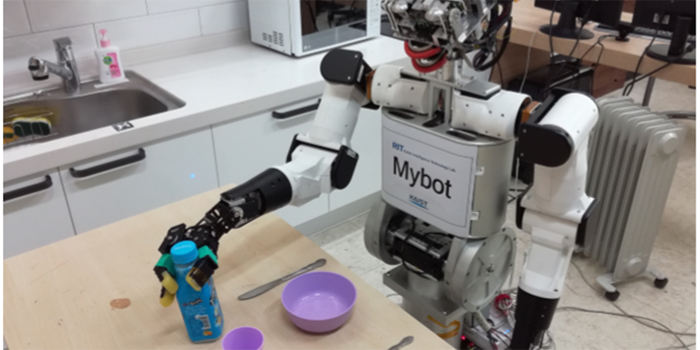 Amid concerns over a robot revolution where some speculate that robots and AI will eventually take over tasks traditionally performed by humans, thereby making humans obsolete, comes word that robots are in development to take over at least some of the tasks in the kitchen.

PhD student Adrian Llopart Maurin, in collaboration with the Korean University KAIST, is attempting to create a humanoid service robot capable of taking over certain tasks in the kitchen with the long-term goal of one day preparing entire meals without help from humans.

Although not expected to be available in the home in the immediate future, such robots are even closer to development thanks to inroads being made with self-driving car technology. This technology enables robots to better understand their surroundings, for instance, other users of the road, traffic signs and trees. However, instead of feeding the robot data about traffic, the “kitchen” robot might instead be trained on images of bowls, cups and glasses, for instance.

Having researched robots at both DTU Electrical Engineering and at KAIST, Maurin based his service robot on KAIST’s humanoid service robot called Mybot. However, Maurin’s bot underwent a name change during development and was eventually referred to as Siambot.

“A robot such as Mybot or Siambot consists of a multitude of systems, each of which is coded to perform a single task — e.g., to see and recognize a cup, to lift an arm, to take hold of something, or to move from one place to another. I’ve been working on integrating the various systems and in this way enable the robot to perform simple tasks,” said Maurin.

Siambot’s eyes contain two different cameras. One of the cameras films in both 2D and standard color while the second camera films in depth by employing a points map so that objects can be reproduced in 3D. Fed by a wide variety of images, Siambot can identify a cup without regard for color or type and can also figure out how best to grip it to pick it up.

“One of the specific tasks I gave the robot was to put a glass of wine on table (A). The only information the robot got in advance was that on the next table — table (B) — there was a wine bottle and a glass. The robot then understood that it had to move to table (B), take the wine bottle — and on the basis of a calculation of the bottle’s height and the location of the glass on the table — pour wine into the glass and place the glass on table (A),” explained Maurin.

“Several companies are in the process of developing this type of robot and there is definitely a huge market for those that succeed. The final breakthrough is expected over the next few years when we will see robots capable of understanding voice messages and carrying out the cooking tasks they are assigned,” said Ole Ravn, head of DTU’s automation sector.

By posting a comment you confirm that you have read and accept our Posting Rules and Terms of Use.
Advertisement
RELATED ARTICLES
KAIST researchers improve speed of robot butler
System teaches robots to do chores
Carnegie Mellon and Sony to Create Robot Chefs
New Frameworks Enable Robots to Learn from Humans
Meet Blue: The robot that may help you around the house someday
Advertisement