Declining Coal Use Has Led to Lower Emissions

Annual U.S. electric power industry emissions of sulfur dioxide (SO2) and nitrogen oxides (NOx) have declined by 88% and 76%, respectively, between their peaks in 1997 and 2017.

The Energy Department's Energy Information Administration (EIA) said that during the period, coal-fired electric power generation was responsible for 90% of SO2 emissions and 76% of NOx emissions. Declining coal-fired generation and implementation of environmental regulations under the Clean Air Act Amendments (CAAA) of 1990 both contributed to the decrease in electric power sector SO2 and NOx emissions. 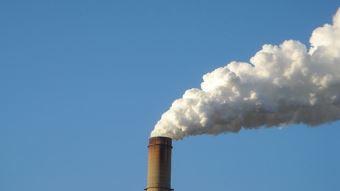 Emissions of SO2 and NOx have declined as coal use for electric power generation has fallen. Credit: Wikimedia Commons by joelbeebEIA said that coal-fired generation peaked in the US in 2007 at 2,016 million megawatthours (MWh) and fell to 1,206 million MWh by 2017. The decline was driven by increased competition from natural gas and renewable generation, along with environmental regulations. 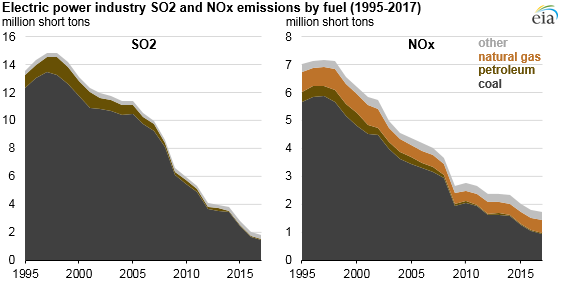 Credit: EIAIn addition to burning less coal to generate electricity, EIA said that the rate at which coal-fired power plants emit SO2 and NOx has also declined during the past two decades, primarily as a result of plants complying with environmental regulations under the CAAA. In 1997, each megawatthour of coal-fired electricity generation produced 14.6 pounds of SO2 and 6.4 pounds of NOx. By 2017, those rates had fallen to 2.4 pounds per megawatthour (lbs/MWh) and 1.5 lbs/MWh, respectively.

EIA said that the CAAA required several regulations that reduced emissions of SO2 and NOx. The Acid Rain Program imposed a cap on emissions of SO2 and NOx from coal and residual-fuel oil-fired power plants starting in 1995. The main compliance approach by electric generators for Mercury and Air Toxics Standards (MATS), with an April 2015 initial deadline, was to install flue-gas desulfurization (scrubber) or dry sorbent injection equipment. Both technologies also remove SO2 and NOx in addition to the targeted air pollutants regulated under MATS. 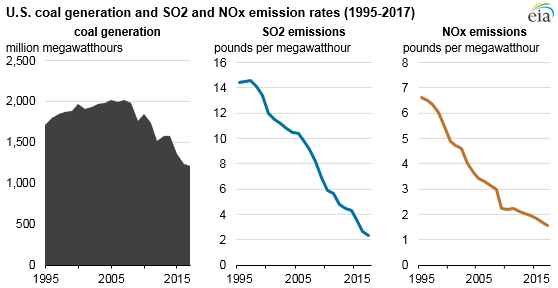 In 2005, the Clean Air Interstate Rule (CAIR) addressed regional interstate transport of contributors to ground-level ozone (smog). It required 27 eastern states to file implementation plans to reduce SO2 and NOx emissions. CAIR was replaced by the Cross-State Air Pollution Rule (CSAPR) in 2015.

By posting a comment you confirm that you have read and accept our Posting Rules and Terms of Use.
Advertisement
RELATED ARTICLES
Air emissions will remain flat through mid-century, EIA says
The role of NOx in sulfate-driven haze formation
This technique is keeping coal in the power generation mix
West's Biggest Coal Power Plant Wins a Reprieve
Xcel Asks to Retire 660 MW of Coal Capacity in Colorado
Advertisement