Limiting global warming to 1.5° C would require "rapid, far-reaching and unprecedented changes in all aspects of society," according to a report by a United Nations panel.

Such a limit would give people and ecosystems more room to adapt and remain below risk thresholds, the report says.

The "Special Report on Global Warming of 1.5° C" was approved by the Intergovernmental Panel on Climate Change (IPCC) on October 6 in Incheon, Republic of Korea. The report is expected to be used in the Katowice Climate Change Conference in Poland in December, when governments are expected to review the 2015 Paris Agreement.

Richard NordhausIn an unrelated event, the 2018 Nobel Memorial Prize in Economic Science was awarded October 8 to a pair of U.S. economists, William D. Nordhaus and Paul M. Romer, for their work highlighting the importance of government policy in fostering sustainable economic growth. 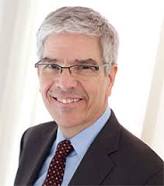 In the latest IPCC report, 91 authors and review editors from 40 countries worked to prepare the assessment in response to an invitation from the United Nations Framework Convention on Climate Change (UNFCCC) when it adopted the Paris Agreement.

"One of the key messages that comes out very strongly from this report is that we are already seeing the consequences of 1° C of global warming through more extreme weather, rising sea levels and diminishing Arctic sea ice, among other changes," said Panmao Zhai, co-chair of IPCC Working Group I in a news release.

The report highlights a number of climate change impacts that the authors say could be avoided by limiting global warming to 1.5° C compared to 2° C, or more. 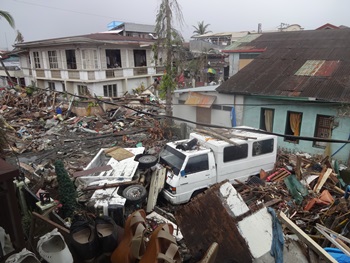 Destruction in Basey, Samar after Typhoon Yolanda passed over the town in 2013. Credit: Lawrence Ruiz via WikipediaThe report also examines the pathways available to limit warming to 1.5° C, what it would take to achieve them and what the consequences could be. "The good news is that some of the kinds of actions that would be needed to limit global warming to 1.5° C are already underway around the world, but they would need to accelerate," said Valerie Masson-Delmotte, co-chair of Working Group I.

A Call for Further CO2 Reductions

The report finds that limiting global warming to 1.5° C would require "rapid and far-reaching" transitions in land, energy, industry, buildings, transport and cities. Global net human-caused emissions of carbon dioxide (CO2) would need to fall by about 45% from 2010 levels by 2030, reaching "net zero" around 2050. "This means that any remaining emissions would need to be balanced by removing CO2 from the air," the report says.

Allowing the global temperature to temporarily exceed or "overshoot" 1.5° C would mean a greater reliance on techniques that remove CO2 from the air to return global temperature to below 1.5° C by 2100. The effectiveness of such techniques are unproven at large scale, the report says. Some may carry "significant risks for sustainable development."

The Paris Agreement adopted by 195 nations at the 21st Conference of the Parties to the UNFCCC in December 2015 included the aim of strengthening the global response to the threat of climate change by "holding the increase in the global average temperature to well below 2° C above pre-industrial levels and pursuing efforts to limit the temperature increase to 1.5° C above pre-industrial levels."

"Global Warming of 1.5° C" is the first in a series of special reports to be produced in the IPCC's Sixth Assessment Cycle. Next year the IPCC will release the "Special Report on the Ocean and Cryosphere in a Changing Climate" and "Climate Change and Land," which looks at how climate change affects land use.

By posting a comment you confirm that you have read and accept our Posting Rules and Terms of Use.
Advertisement
RELATED ARTICLES
IPCC Report: “Clobbered by climate change”
Video: UN report claims climate is at the crossroads
Point: Climate change data is wrong or exaggerated
Study: Underground storage space required for capturing carbon lower than once believed
Hydropower generation and climate change in Sumatra
Advertisement