The ability to accurately diagnose Zika in patients may be confounded by the presence of other closely related biomarkers. Current tests are based on antibodies that interact with a viral protein, NS1, found in the bloodstream of infected patients. Other viruses from the same family, including West Nile and Dengue, have similar versions of NS1 and can produce a false positive.

A new diagnostic protocol devised at MIT does not cross-react with Dengue virus and can confirm Zika infection within 20 minutes. The paper-based test can provide an inexpensive, portable assay for use in areas where both viruses are common. 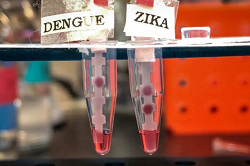 The test differentiates between the four serotypes of Dengue and Zika. (Source: MIT)because they co-circulate. They’re spread by the same mosquito,” said Kimberly Hamad-Schifferli, an associate professor of engineering at the University of Massachusetts at Boston and a visiting scientist in MIT’s Department of Mechanical Engineering.

The researchers identified antibodies that would interact exclusively with the NS1 protein produced by the Zika virus, as well as antibodies specific to NS1 from each of the four different strains of the Dengue virus. Antibodies from mice exposed to both Zika and Dengue viruses were screened, in pairs, against every viral version of the NS1 protein. This allowed them to identify pairs of antibodies that react only with one version of NS1 and not any of the others.

Five separate tests, one for each virus, were then developed by coating strips of paper with one antibody from each pair, while the second antibody was attached to gold nanoparticles. After adding a patient’s blood sample to a solution of these nanoparticles, the paper strip is dipped into the solution. If the target NS1 protein is present, it attaches to the antibodies on the paper strip as well as the nanoparticle-bound antibodies, and a colored spot appears on the strip within 20 minutes.

Tests with patient samples from Mexico, Colombia, India and Brazil showed results comparable to those obtained by polymerase chain reaction tests, which detect viral RNA in the bloodstream.

The approach, which does not require trained personnel or lab equipment, uses five test strips per sample to test for each virus, but the researchers are now working on a version that would test for all five with one strip. A diagnostic for the emerging Powassan virus, which is carried by the same tick that spreads Lyme disease, is also under development.