A Swiss scientist has developed a wearable wristband that repels mosquitoes by simulating a thunderstorm.

The Nopixgo, which has an active Kickstarter campaign, emits weak electromagnetic signals like those that precede thunderstorms. An approaching natural storm signals nearby mosquitoes to override their biting instinct and seek shelter from the storm instead, preventing them biting humans or pets. 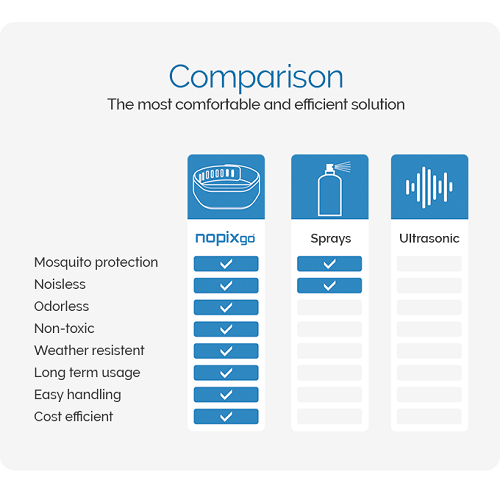 Source: NopixgoNopixgo claims its device can repel mosquitoes up to 2 m from a wearer. Its current iteration promised to reduce bites by at least 50%.

Kurt Stoll developed the technology after witnessing children afflicted by mosquito-borne disease malaria. Malaria is widespread in tropical and subtropical regions and likely killed over 500,000 people in 2016, 90% of them in Africa.

Of all mosquito repellents, including oil candles and ultrasonic waves, only the pesticide diethyltoluamide (DEET) is proven to be relatively effective. But DEET is a strong chemical that may be harmful to infants or people with skin conditions.

According to the Nopixgo Kickstarter page, Stoll was inspired to use electromagnetic waves instead of ultrasound because he approached the problem as a physicist, rather than as a biologist.

Should the Kickstarter campaign reach its goal by September 27, Nopixgo devices could be delivered as early as October.

By posting a comment you confirm that you have read and accept our Posting Rules and Terms of Use.
Re: New Wearable Claims to Repel Mosquitoes using Wrist-based Thunderstorm
#1

Glancing at the headline, at first I was afraid this was an infringement on MY patent, "Wearable Clams to Repel Mosquitoes".