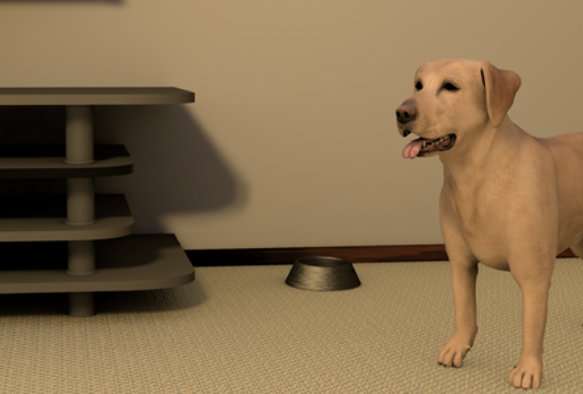 Source: University of LiverpoolIt might one day be possible to teach dogs to not bite (literally) the hand that feeds using virtual reality (VR).

The project, which was led by the University of Liverpool’s Virtual Engineering Centre (VEC) in collaboration with Dogs Trust, involves the development of a proof-of-concept VR experience where people can interact with a virtual dog showing signs of aggression.

In an environment that is safe and controlled, researchers envision that the VR tool could help both children and adults identify the stress and threat behaviors dogs exhibit preceding a possible bite.

As such, animal behaviorists and psychologists from the university worked with the VEC to ensure that details such as the realistic body language of a dog were accurately captured in the VR environment.

Particularly, the team focused on behaviors associated with the “Canine Ladder of Aggression.” By displaying signs of aggression, such as licking its lips, lowering its head and body, lifting its paw, growling and showing its teeth, a dog will signal that it does not want to be approached. Mimicking such behaviors in the VR environment, a user will be able to approach the virtual dog, learning along the way the gradual signs signaling that a dog is preparing to bite.

"This was a really interesting project to work on with a lot of exciting potential for the future," said Iain Cant, VEC Visualisation team leader.

"The next steps will look to enhance the detail within the immersive environment to ensure the simulation is as realistic as possible. Future developments will also show a wider range of dog behaviors and the dog's reactions to user behavior," he added. "More broadly the project highlights how immersive experiences can be used by organizations such as Dogs Trust as a valuable educational tool."

By posting a comment you confirm that you have read and accept our Posting Rules and Terms of Use.
Advertisement
RELATED ARTICLES
Sony's AI-enhanced Robotic Puppies Will Soon Be Available in the US
Kickstarter launches for robot therapy dog
Treatment for Therapy Dogs Prevents MRSA Spread in Hospitals, Study Suggests
Watch: Dog Tales of 3D Printing, Treating Cancer and Robo-companions
Household Pets Unexpected Greenhouse Gas Contributors
Advertisement