Photovoltaic systems make up a small but increasing part of the U.S. power grid and researchers are looking at what effect events such as storms might have on their reliability. The total solar eclipse last August that completely, if temporarily, concealed the sun throughout a 70-mile-wide path across the continental U.S. and left the rest of the country in partial darkness, provided a great opportunity to study what happens during a low or no sun event.

Researchers from the National Renewable Energy Laboratory (NREL) analyzed data from the Western Interconnection, the electric grid which connects utilities in nine western states, parts of five additional states, two provinces in western Canada and part of northern Mexico. The team looked at data collected in one-minute intervals for three days before and after the eclipse and in 10-second increments during the eclipse in order to establish a baseline. 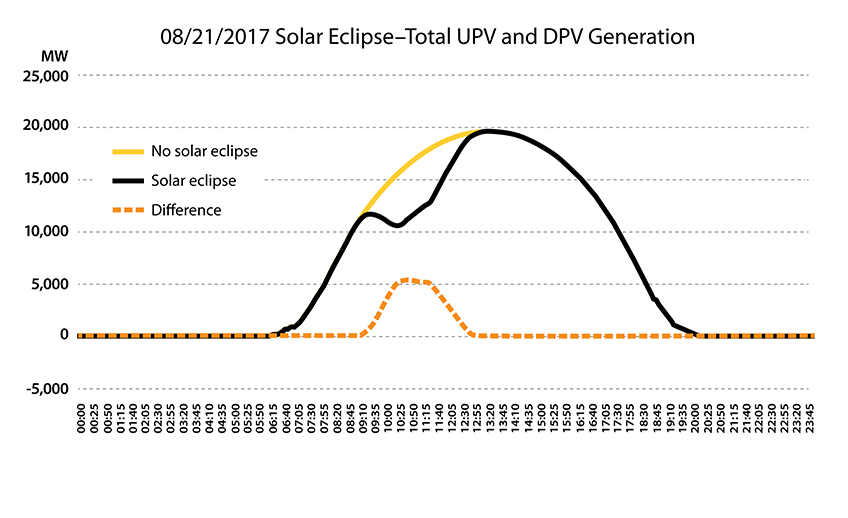 The eclipse caused a dip in output from solar panels. Source: NREL

The data showed that during the eclipse in the region analyzed, utility-scale facilities lost an estimated 4 GW of production, down from 12 GW on a typical day, and rooftop solar lost 1.9 GW, down from 8 GW on a typical day. Despite the temporary drop in solar power, the NREL study determined that the stability and reliability of the grid were unaffected because plants utilizing hydroelectricity, natural gas, and coal easily made up the difference. In addition, the study found the increase in costs of complementary energy sources was minimal.

According to Santosh Veda, a research engineer at NREL and co-author of the report, this study will be used to create the tools to understand the impact of these types of wide-area events on PV output and grid reliability. “These tools will become increasingly important as the PV penetration continues to grow so we can plan to reduce the effects of these events on the grid,” Veda said.

Details of the analysis are found in the report, Evaluating the Impact of the 2017 Solar Eclipse on U.S. Western Interconnection Operations.