Lignosulfonate is a sulfonated carbon waste material generated in the paper-making industry. This abundant, low-cost material offers potential as a sulfur precursor for high performance cathode materials. Researchers at Rensselaer Polytechnic Institute (RPI) sought to exploit this byproduct as a component for lithium-sulfur batteries. The material was demonstrated as both the donor of sulfur and the sulfur acceptor in 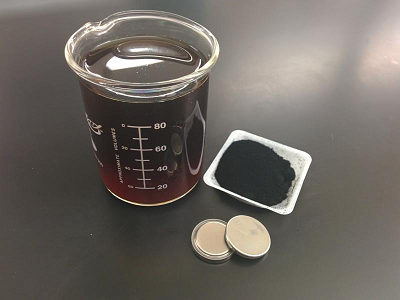 These devices can have more than double the energy of their lithium-ion counterparts of the same mass. When combined with carbon at elevated temperatures, sulfur becomes highly conductive, allowing it to be used in new battery chemistries. The challenge, however, is that sulfur can easily dissolve into a battery’s electrolyte, causing the electrodes on either side to deteriorate after only a few cycles.

Lignosulfonate obtained from a local paper mill was dried and then heated to about 700 degrees Celsius in a quartz tube furnace. The thermal treatment drives off most of the sulfur gas but retains some of the sulfur as polysulfides that are embedded within an activated carbon matrix. The heating process is repeated until the desired amount of sulfur is trapped in the carbon matrix. The material is then ground up and mixed with an inert polymer binder to create a cathode coating on aluminum foil.

A watch battery-sized lithium-sulfur battery prototype can cycle about 200 times. The next step is to scale up the prototype to markedly increase the discharge rate and cycle life.

But brown liquor is not a waste product.

It is concentrated and then burned in a recovery boiler and the sulfites are captured to be used again in the pulping process. This produces carbon-neutral energy for the mill and reduces the pulp plant's need for sulfur. In fact, many paper and pulp mills are a net-producer of sustainable electric power.