Power from Hydrogen at Netherlands Plant by 2023 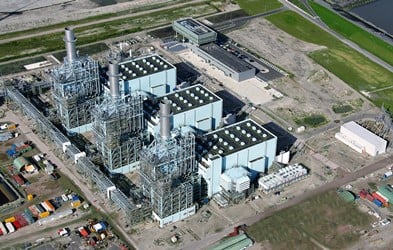 The three-unit plant has a generating capacity of 1,311 MW. Source: Vattenfall

The Carbon-free Gas Power project for Nuon’s three-unit Magnum power plant in Groningen is led by Nuon/Vattenfall, Statoil and Gasunie. MHPS manufactured the gas-turbine operating at the plant and will investigate the technical feasibility of H2 firing.

Each unit at the Magnum station includes a gas turbine, a steam turbine and a generator. This technology enables a generating efficiency of around 58 percent. The station has a production capacity of 1,311 MW.

In order to meet the targets set by the Paris Agreement, CO2 emissions from the electricity sector in the Netherlands will have to be 55 percent to 75 percent lower in 2030 than in 1990. One combined cycle gas turbine plant can emit up to 1.3 million tons of CO2 per year.

Statoil will focus on producing hydrogen by converting Norwegian natural gas into hydrogen and carbon dioxide. The carbon dioxide will be stored in underground facilities off the Norwegian coast, allowing carbon neutral production. Gasunie is carrying out research into how the hydrogen can be transported to and stored at the Magnum power station.

Re: Power from Hydrogen at Netherlands Plant by 2023
#1

Where do you drill for hydrogen?

Re: Power from Hydrogen at Netherlands Plant by 2023
#2

love the idea, form and function. Stored Hydrogen is extremely dangerous. Happy to see that will be off shore. How hard would it be to piggy-back a generator just to split the water?