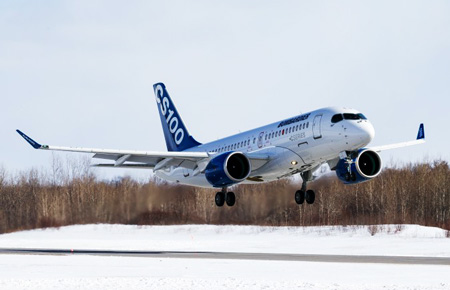 Bombardia CSeries. Source: cseries.comThe company says it will be among the first to use 3D printing to make compressor stators and synch ring brackets for its PurePower PW1500G engines, which power the Bombardier CSeries aircraft family. A subsidiary of United Technology, Pratt & Whitney says it has made more than 100,000 prototype parts over the past 25 years using additive manufacturing techniques.

During production tests, the company has accomplished up to 15-month lead-time savings compared to traditional manufacturing techniques, and also reduced the total weight by up to 50%.

"We are a vertically integrated additive manufacturing producer with our own metal powder source and the printers necessary to create parts using this innovative technology," says Tom Prete, Pratt & Whitney's engineering vice president. “As a technology leader, we are intrigued by the potential of additive manufacturing to support our suite of technologies and benefits to customers and the global aerospace industry."