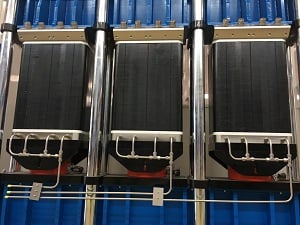 ITM Power electrolyzer stacks. Source: ITM PowerRhineland refinery in Germany. Hydrogen produced at the 10 MW peak capacity facility will be used for the processing and upgrading of products at the refinery’s Wesseling site as well as testing technology applications in other sectors.

The “Refhyne plant is scheduled to start operations in 2020 and will be the first industrial scale test of the polymer electrolyte membrane technology process. The Rheinland refinery, Germany’s largest, currently requires approximately 180,000 tons of hydrogen annually, which is produced by steam reforming from natural gas. The new facility will produce an additional 1,300 tons of hydrogen per year for use in fuel desulfurization and other refinery processes.

The electrolyzer will be operated in a highly responsive mode, helping to balance the refinery’s internal electricity grid and also selling Primary Control Reserve service to the German Transmission System Operators. The system has been designed as the building block for future electrolyzers up to 100 MW and beyond. Refhyne includes a design study into the options for a 100 MW electrolyzer at the Rhineland refinery, which will help prepare the market for deployments at this scale.

Re: Germany to Host World’s Largest Hydrogen Electrolysis Plant
#2
In reply to #1
SolarEagle