Bio-Microbots for Medical Diagnosis and Treatment 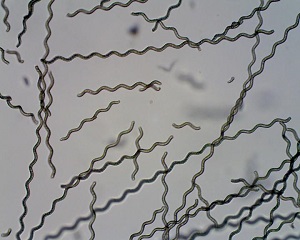 Spirulina algae coated with magnetic particles to form a microrobot. Devices such as these could be developed to diagnose and treat illness in hard-to-reach parts of the body. Source: Yan et al Science Robotics 2017promising tools to diagnose and treat diseases. An international team of researchers fabricated and tested biohybrid magnetic robots for such minimally invasive applications.

Microalgae were functionalized as magnetic bots with a magnetite dip-coating process. A swarm of these devices, measuring only a few millionths of a meter long, were guided magnetically to sites in the stomachs of rats. By using magnetic resonance imaging, the algae’s natural fluorescence enabled tracking of the microbots in tissue close to the skin’s surface, as well as in hard-to-reach deeper tissue.

The researchers suggest that the bots could be used to deliver drugs to parts of the body that are otherwise difficult to treat‎. They can also sense chemical changes linked to the onset of illness within parts of the body, which makes them potentially useful as probes for remote diagnosis.

The time taken for the robots to function and biodegrade within the body could be tailored by adjusting the thickness of their manufactured coating.

The microswimmers were observed to degrade and to exhibit selective cytotoxicity to cancer cell lines, subject to the thickness of the magnetite coating, which could be tailored via the dip-coating process.

By posting a comment you confirm that you have read and accept our Posting Rules and Terms of Use.
Advertisement
RELATED ARTICLES
Watch: Biocompatible microbots morph shape in blood vessels and fluids
Video: Drug-delivery microbots go against the (blood) flow
Magnetically guided micro-bots to take aim at gliomas
Video: Magnetically guided microbots promise to deliver chemo meds directly to cancer cells
New technology promises to capture oil, other contaminants from the ocean
Advertisement