For six years, a team of Monterey Bay Aquarium Research Institute (MBARI) engineers has been developing an experimental buoy that creates electrical energy from ocean waves. The power buoy is still in the experimental stage, but once it is perfected, it may help power research instruments and undersea robots. 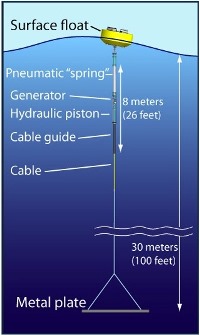 The power buoy can generate 300-400W of power. Source: MBARI Early this year, the MBARI engineers, led by Andy Hamilton, set out to sea to recover the buoy deployed six miles southwest of Moss Landing Harbor, Calif., after testing the system's ability to handle storms. The power buoy was able to remain at sea for 131 days, the longest time yet out of six deployments.

The buoy itself is eight feet across. Hanging in the water below the buoy is a long cylindrical wave-power converter that contains two pistons, a pneumatic spring, a hydraulic system and an electrical system. Below the power converter hangs a fiberglass and metal plate, about four meters (12.5 feet) wide and three meters (9 feet) long. This provides the necessary resistance to operate the buoy's piston systems.

The linear motion of the pistons inside the cylinder drives the generation of electricity from ocean waves. The current version of the power buoy can generate 300 to 400 watts (W) of power during average wave activity, and up to 1,000 W during storm conditions.