Multiple control algorithms were tested with SNL’s wave energy converter, a 1-ton ocean buoy with motors, sensors and an onboard computer built at a scaled down size for research. Classical control theory, robotics and aerospace engineering design principles were applied to improve the converter’s efficiency. 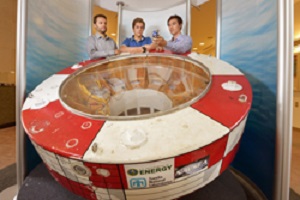 Sandia water power engineers with the wave energy converter buoy. Source: Randy Montoyameasurements,” said Sandia engineer Giorgio Bacelli. “The sensors on the device measure position, velocity and pressure on the hull of buoy and then generate a force or torque in the motor. This action modifies the dynamic response of the buoy so that it resonates at the frequency of the incoming waves, which maximizes the amount of power that can be absorbed.”

The control system uses a feedback loop to respond to wave energy system behavior by taking measurements 1,000 times per second, and continuously refining movement of the buoy in response to the variety of waves. Different control algorithms for the buoy to follow were developed and then tested to determine which would get the best results.

Promising results prompted the team to take the converter to the U.S. Navy’s Maneuvering and Sea Keeping facility at the Carderock Division in Bethesda, Md., for testing in an ocean-like environment. Researchers used the 360-foot-long, 240-foot-wide wave tank to simulate a full-size ocean environment off the coast of Oregon, but scaled down to one-twentieth the size of typical ocean waves to match their device.

“This year, the device can move forward, backward, up and down, and roll in order to resonate at the frequency of the incoming waves,” Bacelli said. “All degrees of freedom were actuated, meaning there are motors in the device for each direction it can move. During testing we were able to absorb energy in each of these modes, and we were able to simulate the operating conditions of a device at sea much more accurately.”

By posting a comment you confirm that you have read and accept our Posting Rules and Terms of Use.
Advertisement
RELATED ARTICLES
Wave-power Buoy Pulls Through Winter Storms Off U.S. Pacific Coast
Energy converter doubles the power extracted from ocean waves
Wave Energy System Advances for Seawater Desalination
DOE funds wave energy R&D
Wave Energy: Chasing the Big One
Advertisement