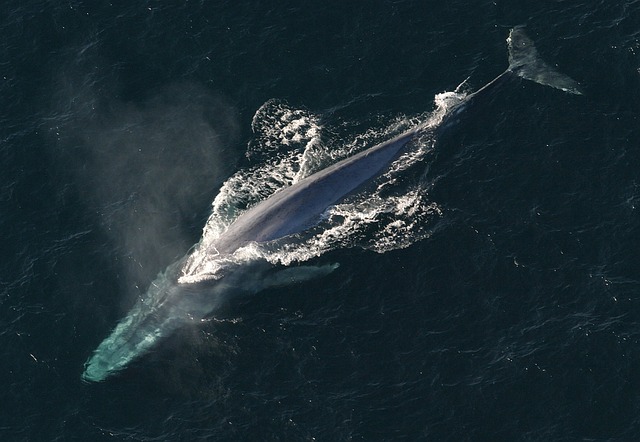 Source: PixabayWith enormous cargo ships responsible for killing nearly 80 endangered blue whales a year off of the United States Pacific coastline, a group of marine scientists has been tasked with a year-long mission to explore possible solutions to prevent the often fatal collisions.

Meeting at UC Santa Barbara for the Benioff Ocean Solution Summit this week, four research groups will begin designing ways to detect the presence of whales in areas with heavy cargo ship traffic. By developing such a system, researchers hope that it will be possible to notify nearby ships to slow down, possibly avoiding collision.

The researchers will be testing their devices in the Santa Barbara Channel, a crossroads of busy shipping lanes and a popular feeding ground for blue whales.

“We are delighted to partner with this all-star team of whale biologists and marine technologists to build a high IQ system to reduce the risks faced by these endangered whales,” remarked Douglas McCauley, director of the Benioff Ocean Initiative and an assistant professor of ecology, evolution and marine biology at UCSB.

Among the methods being tested are underwater microphones used to detect whale calls and whale sound detection algorithms used to determine how these sounds travel underwater. Additionally, researchers will also incorporate thermal imaging cameras capable of detecting the warm-blooded whales.

“This project is an ideal case to get science to really help conservation,” said Daniel P. Zitterbart, of Woods Hole Oceanographic Institution. “After we have been laying the groundwork for thermal imaging-based whale detection for nearly a decade, this is an opportunity to evaluate how this technology can perform as a monitoring tool in whale conservation.”

Working in conjunction with the detection systems, researchers will also use data about the ocean and mathematical models to make predictions about ocean conditions and the likelihood that whales will be in the high-traffic areas being monitored.

“Our team at UC Santa Cruz is excited to work with the Benioff Ocean Initiative towards providing improved predictions of blue whale distribution to reduce ship-strike risk,” said Elliott Hazen from UC Santa Cruz and NOAA’s Southwest Fisheries Science Center. “Blue whales are an iconic predator in the California Current as they migrate its entirety every year searching for krill, and support multiple tourism industries. Blue whales are still recovering from historical whaling, thus anything we can do to keep the population healthy is a win for the ecosystem.”

Added McCauley, “This whale alert system will be like an ocean version of the flashing street signs that warn us to slow down when school is in session. We will finally be able to tell mariners when whales are in these shipping lanes, so they can slow down and exercise caution to avoid unwanted collisions.”

By posting a comment you confirm that you have read and accept our Posting Rules and Terms of Use.
Advertisement
RELATED ARTICLES
Acoustic Buoy Helps Ships Avoid Whales
Study: Whales Halt Their Songs Amid Shipping Traffic, Other Human Activity
Flying Whales: Blimps to supply Canada's northernmost reaches
The right way to weigh a right whale
Plastic Whale to Raise Ocean Pollution Awareness
Advertisement