Satellite-launching Aircraft Could Be Test-flown in 2016

Work is underway on the Roc aircraft, which on completion will be the largest aircraft ever made, with a wingspan of 385 feet. It is designed to carry rockets that can be launched into orbit.

Paul Allen, co-founder of Microsoft, conceived much of the idea behind the plane, while Stratolaunch Systems is building the aircraft, in Mojave, Calif. 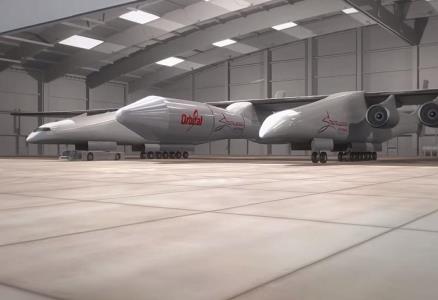 The aircraft is expected to be ready for a test flight in 2016. The Roc will feature six 747-class engines and consists of two 238 feet fuselages. The plane is designed to carry satellites weighing up to 13,500 lbs to 30,000 feet in altitude. This will reduce the amount of fuel needed to launch a satellite into orbit.

To date, about 200,000 lbs of composite structure have been finished for the plane, according to one supplier.

The aircraft is expected to be ready for a test flight in about a year. Launch operations could be tested in 2018. The plane is designed to carry a three-stage Thunderbolt launch vehicle, which uses both solid and liquid-fueled rockets to lift payloads into orbit. The plane also could launch the SpaceX Dream Chaser spaceship, which would carry humans into space.

By posting a comment you confirm that you have read and accept our Posting Rules and Terms of Use.
Advertisement
RELATED ARTICLES
World’s Largest Aircraft, Designed to Air-Launch Rockets into Space, Completes Taxi Test
Four Aerospace Developments to Look for in 2018
Electron Rocket Completes Second Test Flight Successfully
Stratolaunch Reaches Another Milestone
Autonomous, Reusable Experimental Spacecraft Being Developed by Boeing and DARPA
Advertisement