A low-cost route to large-scale production of sulfur-containing polymers has been developed based on click reactions. These controllable, highly reactive reactions are high-yielding, follow simple protocols, use readily available starting materials and work under mild reaction conditions with benign starting reagents.

Lawrence Berkeley National Laboratory and the Scripps Research Institute created long chains of linked sulfur-containing molecules, termed polysulfates and polysulfonates, using a SuFEx click reaction. The technique involves sulfur(VI) fluoride exchange and a new class of catalysts that speed up the reactions. The scheme could be applied to the manufacture of various products, from water bottles and mobile phone cases to medical devices and bulletproof glass. 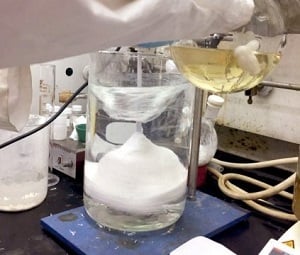 Bulk synthesis of a polysulfate was realized using a chemical technique dubbed a SuFEx reaction. (Source: Lawrence Berkeley National Laboratory)sulfonates. Polysulfates have shown great potential as competitors to polycarbonates (strong plastics used for eyewear lenses and water bottles) but have been rarely used for industrial applications due to a lack of reliable, easily scalable synthetic processes.

In creating a polysulfonate chain with SuFEx, the researchers identified ethenesulfonyl fluoride-amine/aniline and bisphenol ether as suitable materials to use and found that using bifluoride salt as a catalyst made the previously slow reaction “click” into action. The high efficiency of the reaction results in a 99 percent conversion, from starting reactants to products, in less than an hour.

The new reaction requires 100 to 1,000 times less catalyst than other known methods, resulting in significantly less hazardous waste. Bifluoride salts are also much less corrosive than previously used catalysts, allowing for a wider range of starting substrate materials, which researchers said they hope could lead to its adoption for a range of industrial processes.