Micron-scale cocoons, invisible to the naked eye, have been devised to protect tiny particles of beneficial molecular liquid “cargo” in products manufactured by the cosmetics, food and pharmaceutical industries. The solid, tough shells of silk nano-fibrils are more than thousand times smaller than those created by silkworms.

Sensitive molecules with potential health or nutritional benefits can easily degrade and lose these qualities during storage or processing. The researchers say that sealing the molecules in a protective layer of silk is a viable solution, as the micrococoons cannot be seen or tasted yet can be used to add desired ingredients to various products. 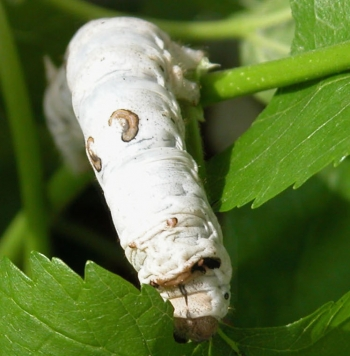 Silk from the Chinese silkworm Bombyx mori was used in this study. (Credit: 2017 Oxford Silk Group)the value of natural silk. The technique mimics the way in which Bombyx mori silkworms spin cocoons from which natural silk is harvested.

The researchers designed a tiny, artificial spinning duct, which copies the natural spinning process to cause the unspun liquid silk to form into a solid. Methods were then formulated to control the geometry of this self-assembly in order to create microscopic shells.

The use of silk is preferred to plastics for synthetic capsule fabrication, due to its biodegradable and biocompatible properties. Silk micrococoons could also expand the range and shelf-life of proteins and molecules available for pharmaceutical use. Because the technology can preserve antibodies, which would otherwise degrade, in cocoons with walls that can be designed to dissolve over time, it could enable the development of new treatments against cancer, or neurodegenerative conditions such as Alzheimer’s and Parkinson’s Diseases.

The work was carried out by an international team of academics from the Universities of Cambridge, Oxford and Sheffield in the UK; the Swiss Federal Institute of Technology in Zurich, Switzerland; and the Weizmann Institute of Science in Israel.

By posting a comment you confirm that you have read and accept our Posting Rules and Terms of Use.
Advertisement
RELATED ARTICLES
Edible QR codes can be used as anti-counterfeiting tool
Tufts team turns silk into non-stick material
Wood and spider web composite material a possible plastic alternative
Spinning artificial muscles with spider silk
Watch: Synthesizing Silk for Medical Use
Advertisement