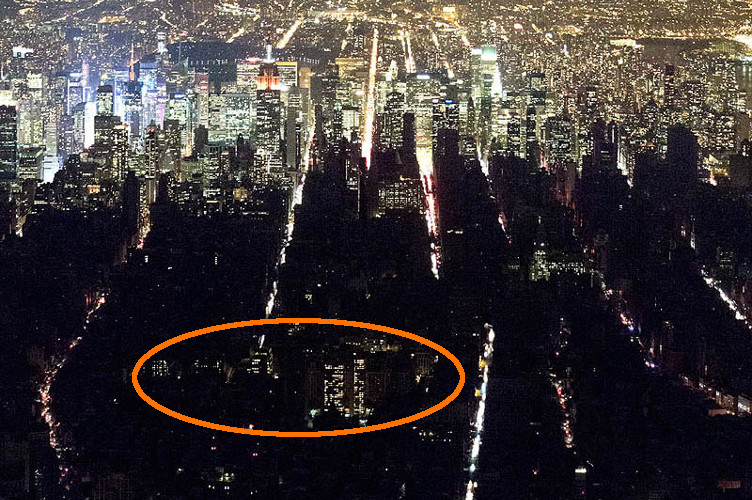 In the midst of Manhattan’s widespread power outages after Superstorm Sandy, New York University’s microgrid provided an island of light.

In 2012, Superstorm Sandy resulted in an estimated $50 billion in economic damage. The storm left over 8 million people without power in 21 states. But even as the grid failed for large sections of the northeast, the campus at New York University was brightly lit. Its microgrid, powered by a 13.4 megawatt combined heat and power plant, kept the lights on through the storm.

Microgrids are local electricity grids with the ability to disconnect from the traditional grid. Their localized nature and ability to function autonomously affords them an array of benefits, including increased grid resiliency, reduced energy transmission loss and easier integration of renewable energy.

Deployment of microgrids is not yet widespread; the vast majority of customers obtain their power from the traditional grid. But the federal government, states and the private sector are working to expand microgrid development and deployment.

In New York, the NY Prize Competition run by the New York State Energy Research and Development Authority (NYSERDA) is driving microgrid development in the state. The successful completion of new microgrid installations will help establish their operational effectiveness and encourage further adoption of the technology. 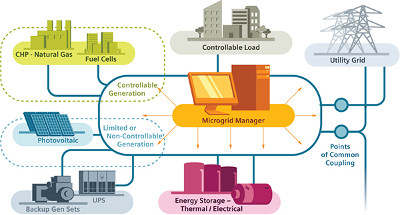 Microgrids distribute power from one or more local resources to local sources of demand, and are capable of drawing power from and giving power to the traditional grid. Credit: Siemens

Microgrids provide a variety of benefits to the grid. One of the principal advantages is grid resiliency. Power outages during storms or other disasters can be particularly disruptive to critical community resources like hospitals, schools and public water facilities. A microgrid can prevent loss of power at these critical facilities by separating from the main grid and providing power from its local generating sources.

New York University wasn’t the only college that maintained power through Superstorm Sandy. The microgrid at Princeton University—powered by a cogeneration facility and a solar panel field—provided electricity during the disaster, allowing the university to serve as a staging area for emergency service personnel and a refuge for local residents.

According to John Saintcross, Assistant Director, NY Prize at NYSERDA, microgrids “are able to separate from the larger electric grid during extreme weather events or emergencies, and provide power to the grid when needed.”

Indeed, microgrids can reduce energy costs by gaining flexibility over consumption of energy from the grid. When prices are high, excess capacity can be sold back to the grid. This is one way to help offset the potentially high capital costs of microgrid installation.

Improved energy efficiency can be realized by the cogeneration of thermal and electrical energy in a combined heat and power (CHP) facility—a common energy source for microgrids. In a CHP plant, electricity is produced by a gas turbine generator. Heat from the turbine’s exhaust is recycled by heat recovery steam generators to produce steam for a heating system. Compared to separate heat and electricity production, cogeneration boosts energy efficiency. 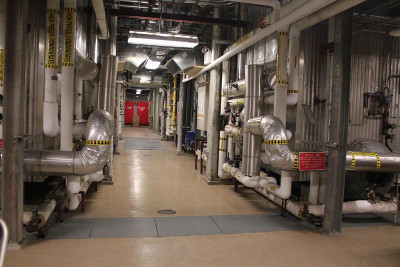 Sustainability benefits in microgrid systems can also be attained by enabling integration of renewable energy resources like wind turbines and solar panels. Demand response capabilities such as flywheel- or battery-based grid stabilization technology can even out the power variations of renewable sources. Microgrids can coordinate these emerging decentralized resources locally and join them with the traditional grid at an appropriate scale and mode of operation.

Microgrids change the paradigm of large generating sources located far from the point of consumption that require long-distance transmission of power. “As microgrids build local generation, there is less of a need for central station power plants,” Saintcross said. The transmission losses that occur over the long distances that electricity travels in the traditional grid are reduced with microgrids. In addition, they can provide the traditional grid with congestion relief and improved voltage, frequency and waveform stability by providing electricity as needed to balance voltages and relieve demand on the grid during periods of high energy use.

The benefits of microgrids are numerous, but obstacles to their widespread integration into the traditional grid exist. “The major obstacles are the legal, regulatory and financial barriers around microgrid development,” Saintcross said. “Under Governor Cuomo’s first-of-its-kind NY Prize competition, the state is working to address these issues with the intention of reducing or eliminating these barriers.”

The NY Prize Competition seeks to facilitate microgrid development by fostering effective industry models through partnerships between communities, utilities, local governments and the private sector. Its mission is to help communities lower costs, promote clean energy and improve the reliability and resiliency of the grid. 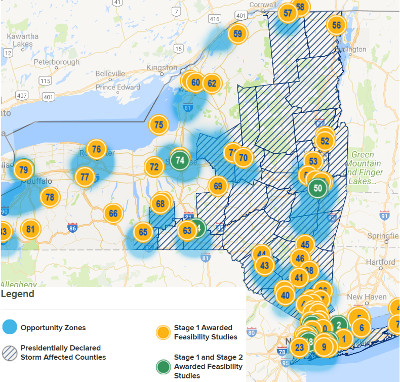 Map of the communities awarded funds for microgrid feasibility studies in Stage 1 and Stage 2 of the NY Prize Competition. Credit: NYSERDA

According to Saintcross, nearly 150 communities applied for Stage 1 of the competition, and over $8 million was awarded to 83 communities across the state to conduct microgrid feasibility studies in 2015. 11 winners from projects around the state were selected in Stage 2 and awarded $11 million in funding to conduct comprehensive engineering, financial and commercial assessments for installing and operating community microgrids at their proposed sites.

The NY Green Bank will provide up to $50 million in additional financing per project to stage 3 winners for microgrid construction. Winners are expected to be announced by the end of 2018.

NY Prize could help spur microgrid development beyond New York. “NYSERDA is also working with other states such as California and Massachusetts and the Department of Energy who are interested in the state’s microgrid efforts,” Saintcross said.

An innovative, first-in-nation program to support the development of community microgrids, NY Prize seeks to demonstrate their technical, business and regulatory feasibility. In this way, the program could help kickstart a self-sustaining industry, bringing the advantages of microgrids to a wider audience. In the years ahead, communities statewide and around the country could benefit from the improved power reliability, enhanced energy efficiency and reduced environmental impact that microgrids promise.

Part 2 of this series will examine one of the Stage 2 winners of the competition: the Empire State Plaza microgrid project in the state capital of Albany.

By posting a comment you confirm that you have read and accept our Posting Rules and Terms of Use.
Advertisement
RELATED ARTICLES
Empire State Plaza Microgrid Vies for NY Prize
ComEd to Build Microgrid, Study It for a Decade
Energy management in microgrids
Four Ways the Electric System Can Better Integrate Microgrids
Puerto Rico Sets Rules for Electric Microgrids
Advertisement