Mapping the Origins of Stars and Galaxies

A consortium of U.S., German and Canadian academic institutions are overseeing development of a powerful telescope capable of mapping the sky at submillimeter and millimeter wavelengths. When completed in 2021, the 6-m aperture telescope, Cerro Chajnantor Atacama Telescope-prime (CCAT-p), will be located near the summit of Cerro Chajnantor in Chile’s Atacama Desert.

Its novel optical design, high-precision mirrors and high-altitude location (over 18,000 feet) will establish the CCAT-p telescope as a premiere facility for astrophysics and cosmology research. The telescope will open the highest frequency radio windows accessible from the ground to study, among other things, the detailed physics of star formation in the Milky Way and the local universe. 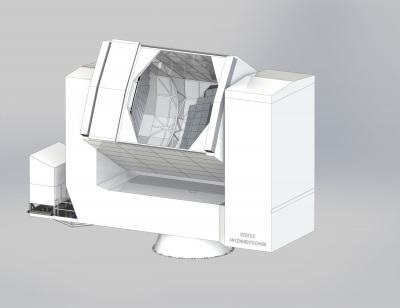 A highly efficient mapping capability positions the CCAT-p telescope as a platform for next-generation cosmic microwave background (CMB) experiments. Researchers expected to be able to map the CMB roughly 10 times faster than with current telescopes.

CCAT-p is being constructed by Vertex Antennentechnik GmbH of Duisburg, Germany. The CCAT corporation is a partnership of Cornell, the German Universities of Cologne and Bonn and Canadian Atacama Telescope Consortium (CATC), a consortium of Canadian academic institutions.