Reliable Gear Reduction Units Are Critical For Many Applications

It’s pretty obvious that there are a great many more electric motors in use. They are used in many industries – from airports to office buildings to production lines. Many important applications use gear motors and speed reduction gears to gain optimum use of all sizes of electric motors. The optimization of the electric motor function using efficient gearing is making a myriad of applications more effective and more reliable.

World demand for electric motors is projected to increase 6.5% per year from $122.5 billion in 2017. “Something like 40% of all electric power is used to drive motors, and that number will only grow,” says James Kirtley, a professor in MIT’s Department of Electrical Engineering and Computer Science and MIT’s Research Laboratory of Electronics. “Electric motors are being used more widely in ships, airplanes, trains, and cars. We’re also seeing a lot more electric motors in robots.” As one of the world’s leading experts on electric motors, Kirtley’s philosophy is that one size does not fit all. “If you take into account the specific application, you can build a motor that is far better adapted than a general purpose motor,” says Kirtley (https://energy.mit.edu/news).

For industrial/factory automation, in particular, reliable motor speed reduction units for medium size loads are key elements. No one wants to use clumsy and unsafe V-belt or chain drives. Geared motor speed reducers are more reliable, and can be quieter and have much less vibration.

A close look at one motor speed reduction unit

There are quite a few manufacturers of compact gear driven speed reduction units. I chose one particular system from Sumitomo Drive Technologies to look at more carefully.

The Cyclo Bevel BuddyBox 4 Series (Cyclo BBB4), is described as “a robust, state-of-the-art, mid-sized family of speed reducers and gear motors.” I’m pretty sure it is one of the best units available. It combines a gear reducer and a single stage right angle spiral bevel gearbox with an overall efficiency of up to 94% and comes in six sizes rated for a maximum motor size of up to 100 HP. The motors for these units come in multiple voltages and are complete with certifications. More about motors later.

The gear train’s Cyclo technology combines high torque density and compact size with quiet and reliable operation. The cycloidal "gearless" speed reduction torque transmitting parts roll, rather than grind, yielding long life and high shock load capacity. The Cyclo input has two-thirds of its reduction components in contact at all times, improving ruggedness and shock resistance. This Cyclo input performs a majority of the speed reduction, allowing an oversized bevel pinion that makes the gear train much more robust and reliable. 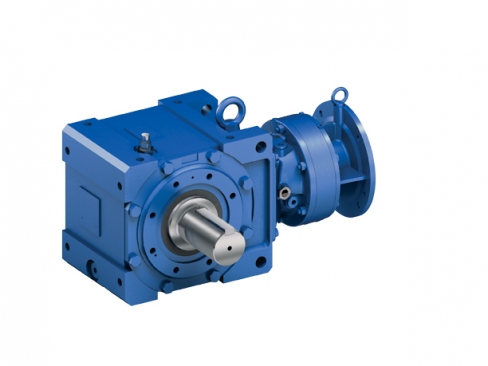 Available gear ratios go all the way from 11:1 to 26,000:1 and standard gear motors come in 1/8 to 75 HP (55 KW) sizes. As I mentioned before, the units are more compact than others. They also feature a ductile iron housing that is twice as strong as cast iron, making it much more rugged than many others. All rotating components are made of hardened steel. The BBB4 is also available in a screw conveyor drive (SCD) configuration.

The units are capable of operating 24/7, with moderate shock load. They are now being used in applications such as automotive assembly lines, food processing equipment, textile mills, lumber mills, package handling systems, chemical and materials processing machinery, and wastewater treatment plants. The drives weigh from 107 to 917 lb., without a motor. 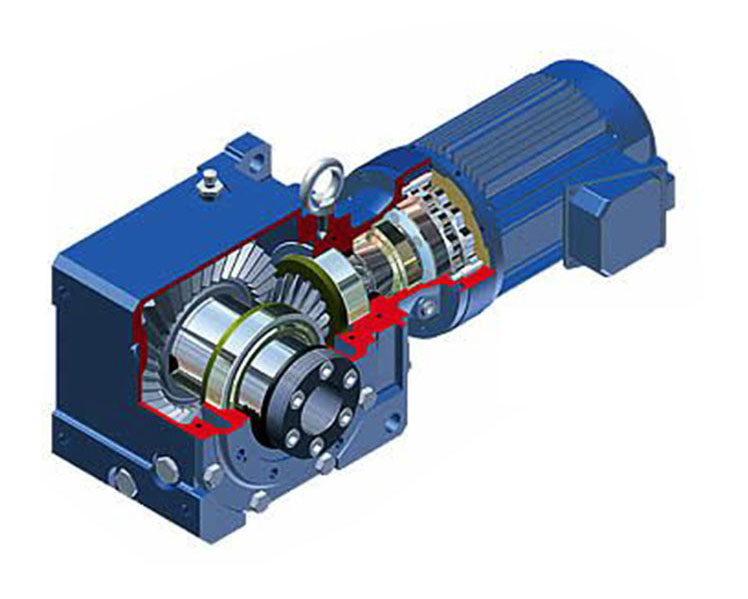 Standard motors operate at 1750 RPM, with single and 3-phase AC power options. Sumitomo offers as standard their EP.NA series of premium efficiency 4-pole motors with UL/CSA/CE certification and DOE efficiency qualification. These motors operate from 230, 460, or 575 V lines at 60 HZ (50 HZ optional). They are integral motors and not NEMA style. The gear units will also accommodate NEMA, IEC, JIS, UL, CSA, and CE motors with solid and quill input shafts.

The Cyclo BBB4 comes with oil or grease fill, depending on the application requirements. The grease filled units are basically maintenance free, but grease does cause a little higher drag and some temperature rise. Grease filled works in the Cyclo BBB4 because of the cycloidal input design, with its rolling elements, means less friction and less heat to dissipate. The Cyclo input is providing a majority of the ratio, meaning the output section ratio can be much slower, which again means less friction and heat.

A Look at Two Application Examples

In an automotive assembly plant, the movement of the vehicle on the line and of material to the assembly line is accomplished with hundreds, if not thousands, of electric motor driven conveyors. These motors most often operate through a speed reduction gear train. Modern plant operations are performed using lean manufacturing, or just-in-time, continuous improvement (kaizen) systems. Material inventory required to do the job is kept to a minimum at the point of assembly. The synchronization of the production line is critical, and therefore reliability of the conveyors, the electric motors, and the gear train is paramount. These lines cannot afford to stop one element in the flow for repairs. This is the case for the robots and flexible machines of the production line. The highest quality gear reduction units are a necessity and will pay for themselves many times over in the 24/7 operation of most production lines.

In the United States, every piece of baggage that is checked in at an airport is required to be inspected for prohibited and hazardous materials by an explosive detection system (EDS) machine or by an alternative method. EDS machines use X-rays to detect explosive materials. In many airports, the baggage is checked-in at the airline’s counter and then travels via a conveyor system through the baggage hall for inspection and delivery to the appropriate aircraft.

The Queue Conveyor is a relatively short unit that transfers baggage from the conveyor system to the EDS machine. EDS machine requires the bags to be fed uniformly and at a designated rate and the primary function of the Queue Conveyor is to control this baggage flow. As EDS machine manufacturers develop faster and more accurate products, the Queue Conveyor must be able to operate under the increasingly demanding condition as it is required to start and stop with high frequency. Conveyor belt speed typically varies from 90 up to 350 feet per minute. Frequent starting and stopping can be strenuous on the motor because the inrush current at startup is typically 6 to 10 times higher than the rated operational current.

The available spacing in the baggage hall may restrict the size of the speed reducer and the motor, and so a more compact design for the motor and the speed reducer is desirable. One way that can be achieved is by using an integral gearmotor design or a motor with the speed reducer. In one such application the Cyclo BBB4 was torn down after 2,500,000 cycles and had minimal gear wear.

The mechanisms that make electric motors more usable, efficient, and quiet are terribly important to a great many industries. In many cases, these drive units need to be as rugged and reliable as any component used in industry, and they have been coming through with flying colors.

By posting a comment you confirm that you have read and accept our Posting Rules and Terms of Use.
Advertisement
RELATED ARTICLES
NORD Gear to showcase gear units for poultry processing industry at IPPE 2020
Selecting an appropriate gear reducer
NORD IE5+ motors offer new levels of energy efficiency
Gear Reducers 101: Back to the basics
An introduction to gear motors
Advertisement