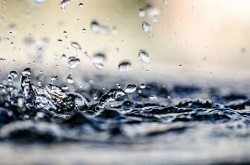 A catalyst that can split water into hydrogen and oxygen far more efficiently than previous agents was designed by University of Houston researchers. The catalyst, composed of ferrous metaphosphate grown on a conductive nickel foam platform, is also less expensive to produce relative to the use of precious metals.

The durable discovery operated more than 20 hours and 10,000 cycles in testing.

Oxygen evolution reactions often depend upon an electrocatalyst using an expensive noble metal, such as iridium, platinum or ruthenium. The new highly active and stable electrocatalyst is instead based on earth-abundant elements, which even outperform the noble metal based ones. This finding may lead to a more economic approach for hydrogen production from water electrolysis.

Water splitting can be triggered either through electric current or through photocatalysis, using the power of the sun. Direct solar-powered water splitting is too inefficient, as water can absorb just a small portion of the light spectrum. Ideally, solar power would be used to generate the electric power used to split water.