Cystic fibrosis (CF) is a genetic disease that affects over 70,000 people per year around the world. New research has found that a sticker could potentially be used to help detect CF.

The findings, published in Science Translational Medicine, suggest that this simple sticker could one day provide a non-invasive way to screen for the disease. CF is a genetic disorder that affects the lungs and digestive system, and currently, there is no cure. Early diagnosis is important for patients, as it can help them receive treatment and manage their symptoms. This research provides hope that an easy and cheap screening method could one day be available to help people with CF.

Measuring chloride has been the primary way to detect CF since the 1960s. This has its drawbacks, as the equipment is bulky, hard to fit on children and doesn’t collect enough sweat for a diagnosis. If the test isn’t successful, the child often has to wait for a couple of weeks to come back and take it again, sometimes driving for hours or even flying to a facility that can carry out the test.

The team of engineers from the University of Hawaii thinks they have found an alternative to this process in their new creation, sticker sweat collectors. They have created a small, coin-sized sticker that is malleable and changes color as it is subjected to higher concentrations of salt. During their initial tests, the stickers were compared to traditional sweat collecting equipment, and it was found that the stickers collected more sweat in a shorter time.

This was an exciting discovery for the engineers and scientists, as this technology could make diagnosing CF much more accessible for patients. Once approved, the days of children flying 2,500 miles to get tested would be over.

How does it work?

Sweat testing and wearable sensors have been on the team leader from the University of Hawaii’s radar for some years now. His aim back in 2016 was to create devices that could track body chemistry in real-time using myriad valves, dyes and channels. Soon after, he had published a paper on wearable sensors revealing the lactate, chloride and glucose levels in sweat. This was aimed at military members and athletes, especially long-distance cyclists. This could be deployed in devices similar to modern smart watches. 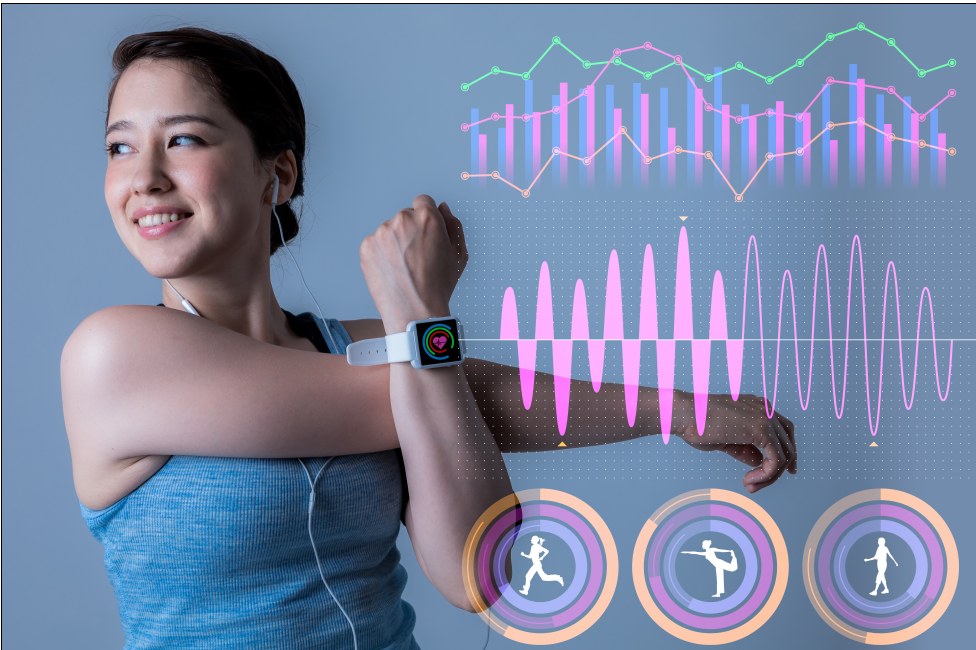 The stickers that have been derived from this research are about one inch wide, completely flat and flexible enough to attach comfortably to an adult or infant arm. They look like traditional stickers (even featuring some cartoon stickers for children) and soak up sweat through the middle into thin canals that funnel it out the edge of the sticker.

A weak electric current is then used to apply a sweat gland activation gel called pilocarpine to the skin. Five minutes after this, the sticker is applied and begins to collect sweat. The sweat mixes with a silver chlorinalite gel, which is initially clear, but immediately changes color when it comes into contact with chloride. If there are no chloride ions in the sweat, the gel remains clear and the test is completed. If the sweat does contain these ions, the gel will slowly turn pink and will continuously get darker as more sweat is collected. This color is then analyzed through an analysis app, and the chloride levels will be gauged.

Algorithms within the app were written to process the images, and various methods of reference colors and overlays were tested. They finally settled on a green overlay that made the change in color more visible, which enabled a smartphone camera to pick up enough data to accurately make a diagnosis.

During this study, the sticker devices were tested on 52 people, ranging in age from 2 months to 51 years old. The main objective of these human tests was to confirm the proficiency of the sticker’s sweat collecting technology, and it was found that it was 33% more effective than commonly used sensors. There was no reported test that collected an insufficient amount of sweat, as the new sticker collected almost twice as much sweat in 18 minutes than the traditional sensor did in 30 minutes.

Benefits of this technology

These stickers could completely change the way CF is diagnosed. Not only will patients not have to travel to get tested, but the compact sticker design could also allow for at-home testing and daily monitoring of chloride levels. Daily monitoring will give patients and doctors alike insights into how they react to certain drugs, treatments or diet plans.

At-home chloride monitors do not exist right now, so it is easy to see why the researchers are excited about this new technology. There are many different avenues of research that this opens up for doctors looking to find out more about CF potentially answering questions like: "Do daily spikes in chloride worsen symptoms?, and if a patient’s chloride levels are rising, does that mean their condition is getting worse?" This new sticker technology and the influx of new wearable electronics and sensors make researchers hopeful that 24/7 monitoring of chloride levels will enhance their understanding of CF, and hopefully find a cure some day.

While there is still a lot of research to be completed, the potential for increased quality of life for CF patients due to wearable health sensors and this new sticker technology is promising. With more people using wearable devices like Fitbits and Apple watches, it's likely that we'll see an increase in the use of health sensors in the future. The use of stickers to diagnose CF patients earlier and with higher accuracy is a prime example of how technology can be used to improve people's lives.

So, what do you think of this new technology? Will advancements in technology like this get scientists closer to curing some of our incurable diseases? Engineering360 would love to hear your thoughts in the comments below!