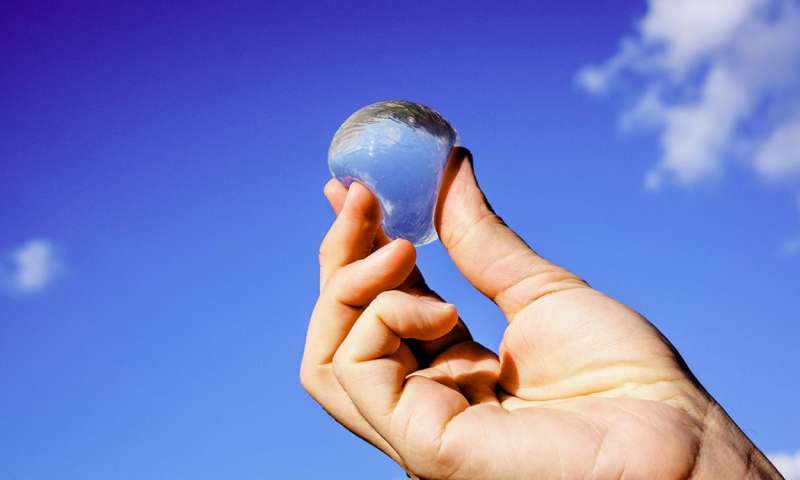 Image credit: Skipping Rocks LabA team of entrepreneurs affiliated with Skipping Rocks Lab has started a crowdfunding effort to mass-market a consumable water bottling device that produces what they call the Ooho!— a spherical blob of water held in a thin membrane that is small enough to be popped into the mouth. The team is looking to raise a half-million dollars to market their idea, which they claim is an attempt to do away with plastic packaging waste.

Skipping Rocks Lab is a London-based startup that has set a goal of creating innovative sustainable packaging for products. The idea for the Ooho! came from the culinary world, where liquids are packaged using what is called spherification — an ice ball is dipped in a mix of brown algae and calcium chloride. A clear membrane forms, holding the ice as it melts, eventually giving way to a sphere of water, juice or other liquid. Some have suggested the end result looks very much like a breast implant or even a jellyfish. Because the membrane is made from natural ingredients, it can be eaten or tossed in a compost pile, or perhaps on the ground, where it biodegrades over the course of a week or so. On their site, the team notes that the process can be modified to create different sized balls and membrane thicknesses — it can even be made to allow for edible labels (made from rice paper) to be suspended between layers. Flavors can also be added to the membrane itself; otherwise, it is tasteless.

The purpose of the project, the development team claims, is to rid the world of the problem of water bottles piling up in landfills around the world — hundreds of millions are added to the global pile every day. Bottled water, which now outsells all other packaged beverages in the United States, presents a clear environmental problem. The team at Skipping Rocks wants to make and sell (or lease) the machine that is used to create the Ooho!, which would allow venues to produce them onsite, instead of selling water in plastic bottles — prime possibilities would include marathons, concerts, park-side stands or amusement parks.

By posting a comment you confirm that you have read and accept our Posting Rules and Terms of Use.
Re: Crowdfunding a Consumable Spherical Water Bottle — the Ooho!
#1

Maybe in flavors for kids, who will enjoy popping in mouth. Will need small size, oohitos?

Appeal comes from widespread and scientifically unsupportable fear of plastics, which people will express but not pay for.

Re: Crowdfunding a Consumable Spherical Water Bottle — the Ooho!
#2

Only a few years ago when people wanted a drink of water, they used a public drinking fountain. Then some marketeer thought of selling water instead of giving it away. This was thought of a way to make water portable, although the canteen had already been in use since Roman times, the mindset was that purified City tap water in a disposable plastic bottle was somehow safer and better for human consumption, never mind the fact that billions of school children had grown up drinking purified chlorinated drinking fountain water and those same children grew into 90+ year old adults with no ill effects.

Water was even put into recyclable steel cans, that when empty and disposed of into the ocean, sank to the bottom and due to the corrosive effects of salt water dissolved away, plus because they wouldn't float, migratory animals, birds, mammals etc wouldn't likely be eating and swallowing them.

Now some genius comes up with an idea that will double or quadruple the quantity of disposable trash that will be floating in the oceans and dispersed over Terra firma.

Re: Crowdfunding a Consumable Spherical Water Bottle — the Ooho!
#3
In reply to #2
Griffex

How does your post relate to the Ooho? I don't know if its poly-seaweed floats or sinks, but if it's eaten along with the water, it doesn't matter and won't multiply ocean trash. My concerns with cost and outer protection do matter.

As for the single-use plastic bottle which is your focus, I have carried a canteen at times, and that's what all the steel or plastic refillables are today. Very common in California, where I think both of us are. My "canteen" is now a plastic bottle with tap water (which I agree is safe), but I use a soft-drink bottle -- stronger than the usual disposables because it had to take internal pressure. I am worried about sterility of any refillable, but especially the metal ones favored by the "plastophobes," as they are opaque and often hard to clean.

Very little water is in cans, which are used much more for beer and carbonated soft drinks but their strength isn't needed for tap water. And the plastic beverage/water bottles don't float either, but that doesn't matter because they are not toxic.

The image of purity is a very strong motivator, even if it's technically unfounded. The convenience of the one-use water bottle goes along with the desire to have what you want wherever and whenever you want it, which is as "corrosive" to our environment as the packages themselves. Finally, in CA we get money back for the water bottles, so if they get into the ocean at all, it's because of the affluence, arrogance or laziness of the user, mostly the latter. I don't have an answer to that one.

Re: Crowdfunding a Consumable Spherical Water Bottle — the Ooho!
#4
In reply to #3
tonyhemet

There are quite a lot of slobs out there, especially in California. Oh ya they festoon their cars with coexist stickers and such but they are some of the first to unwrap any wrapper and throw it on the ground while they stuff that something into their mug. If it wasn't for all of the dumpster diving going on by the bicycle riding night people, there would be plenty more of those one time use water bottles heading down the L.A. river right now.

That water globule has to be wrapped in something and that something ain't gonna be picked up by night time trash pickers, so it's going to be blown down into the gutter regardless of the painted flows to ocean sign near every rain culvert.

It's almost like those gardeners with the leaf blowers, do they really think that blowing your leaves and grass clippings for your yard on to your neighbors property is really going to clean and beautify the neighborhood ?

And this is just another in the long and ever growing list.

Re: Crowdfunding a Consumable Spherical Water Bottle — the Ooho!
#5

It looks a brilliant idea, however there are other issues to be considered.

The big issue is the hygienic/contamination concerns about the handling of the spherical water bottle. Anything would stick to its surface and then in people mouth!

It would require another packaging to be transported or handled...and there we go again with more plastic.

Re: Crowdfunding a Consumable Spherical Water Bottle — the Ooho!
#6