Researchers from the Graphene Flagship, an EU research consortium involving over 150 academic and industrial research groups in 23 countries, have developed a new device for recording brain activity in high resolution, while maintaining an excellent signal to noise ratio (SNR). The flexible devices, based on graphene field-effect transistors, open up new possibilities for the development of functional implants and interfaces.

The devices were used to record the large signals generated by pre-epileptic activity in rats, as well as the smaller levels of brain activity during sleep and in response to visual light stimulation. These activities lead to much smaller electrical signals, and are at the level of typical brain activity. The biocompatible graphene transistor probes showed excellent performance, with a high SNR and good spatial discrimination of the brain activity. 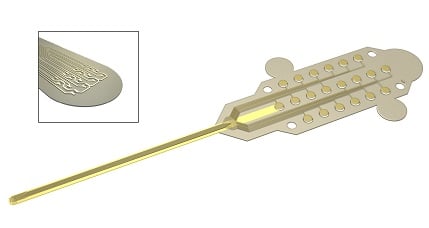 The graphene-based probes are competitive, with state-of-the-art platinum electrode arrays, the benefits of intrinsic signal amplification and a better signal-to-noise performance when scaled down to very small sizes. This will allow for development of ultra-small, more densely packed, and higher-resolution probes essential for precision mapping of brain activity. The need for a preamplification close to the probe — a requirement for metal electrodes — is eliminated by the inherent amplification property of the transistor.

The probe is formed by an array of 16 graphene-based transistors, each with an active area less than the cross section of a human hair arranged on a flexible substrate. The devices, which are placed directly on the surface of the brain, were determined to be non-toxic, and did not induce any significant inflammation.

The researchers envision these devices as neural prosthesis for therapeutic brain stimulation technologies, and as interfaces for sensory and motor devices, such as artificial limbs. Continuing work will focus on the first human clinical trial with graphene devices during intraoperative mapping of the brain, and optimization of the wafer-scale fabrication process.

By posting a comment you confirm that you have read and accept our Posting Rules and Terms of Use.
Re: Graphene Micro-transistor Maps Brain Activity
#1

I study the toxicity of Graphene in vivo

From the Rules: Do not post phone numbers or email addresses. You can share this information via the forum's internal messaging system.