Video: Why is Graphene so Important to Engineering Research?

Why is the 2-D atomic-scale hexagonal lattice known as graphene, first isolated in 2004 by two researchers at University of Manchester, UK, widely considered the next disruptive technology? Its fundamental physical, chemical, and mechanical properties can benefit an array of applications in just about every sector imaginable. 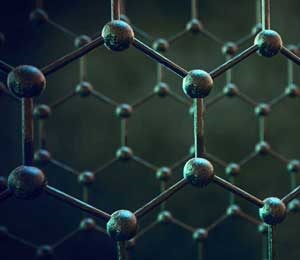 Hexagonal graphite lattice (Source: University of Manchester)Graphene is the first 2-D material to be discovered and is 200 times stronger than steel but lightweight and flexible. It is electrically and thermally conductive but nearly transparent, and is one million times smaller than the diameter of a single human hair. Applications are being explored in solar cells, LEDs, medical devices, polymers and composites, capacitors and batteries, transistors, films and a wealth of other areas.

The importance of graphene in engineering research lies in the diversity and utility of these applications. Graphene could have a significant impact across industries and sectors such as electronics, medicine, aerospace, automotive, energy storage, water desalination, coatings and paints, solar technologies, oil and communications.

Large-scale production of graphene is necessary for applications such as printable electronics, electrodes for batteries, and catalysts for fuel cells. Perhaps the easiest way to make large quantities of graphene is to exfoliate graphite into individual graphene sheets via the use of chemicals. The downside is that side reactions occur with oxygen, forming graphene oxide that is electrically non-conducting and less useful.

Novel techniques for graphene production are under development, including a simplified single-step fabrication method devised by Australia’s Commonwealth Scientific and Industrial Research Organization. The GraphAir synthesis scheme eliminates the use of compressed gases or chemical vapor deposition and instead uses soybean oil, ambient air and inexpensive polycrystalline nickel foil to produce graphene film.

A method for graphene synthesis by controlled detonation has been developed and patented by Kansas State University physicists. Unlike other approaches, researchers say this method is less energy-intensive and proceeds without the use of catalysts or dangerous chemicals. Hydrocarbon gas, oxygen and a spark plug are all that’s needed.

The low-density graphene aerosol gel in this container was created by a hydrocarbon detonation method recently patented by Kansas State University researchers.

Rutgers University engineers have found a method for producing high-quality graphene that can be used in next-generation electronic and energy devices: bake the compound in a microwave oven. Baking exfoliated graphene oxide for 60 seconds in a 1,000-watt microwave oven can eliminate virtually all of the oxygen, which distorts the pristine atomic structure of graphene, from graphene oxide.

Recognizing the promise of graphene and the challenge of driving such a diverse field of research, the European Union launched the Graphene Flagship in 2013. The initiative coordinates over 150 academic and industrial research groups in 23 countries focused on increasing the commercial output of graphene research.

Participating scientists have developed a device based on graphene field-effect transistors for recording brain activity in high resolution, while maintaining an excellent signal-to-noise ratio. Other achievements include a new method for producing high quality conductive graphene inks with high concentrations, and the application of graphene interface engineering to produce high-performance modules of eight connected perovskite-based solar cells.

Adding graphene to the children's toy Silly Putty (polysilicone) yields a compound, dubbed G-putty, that conducts electricity and that is sensitive to deformation or impact. The material could be used in medical sensors.

Fujitsu Laboratories Ltd. has unveiled a highly sensitive gas sensor in which the gate part of the silicon transistor is replaced by graphene. The development may pave the way for compact instruments that can measure specific gas components with speed and sensitivity in order to monitor atmospheric pollution or test for organic gases in a person's breath to detect disease.

A method for producing conductive cotton fabrics using graphene-based inks may open possibilities for flexible and wearable electronics, without the use of potentially expensive and toxic processing steps. Researchers from the University of Cambridge and Jiangnan University, China, have devised a method for depositing graphene-based inks onto cotton to produce a conductive textile. They say the work demonstrates a wearable motion sensor based on the conductive cotton.

In addition to advancing materials, electronics, medical, and other sciences, graphene is expected to play a role in expanding the Internet of Things.

By posting a comment you confirm that you have read and accept our Posting Rules and Terms of Use.
Advertisement
RELATED ARTICLES
Graphene Textiles Could Enable Wearable Electronics
A Clean Route to High-quality Graphene Production
Graphene dough easy to transport, store and mold
Microwaves Are Used to Produce High-quality Graphene
Non-Flammable Graphene Membrane Developed for Safe Mass Production
Advertisement