They are called by many names: scissor lifts, bucket lifts, boom-mounted buckets, vehicle-mounted boom buckets, but they all really are MEWPs—mobile elevating work platforms. They have been around for years in construction, warehousing, utilities, and other industries where applications exist with the need to move a person from the ground to a specific height, and do it safely, simply, and repeatedly. 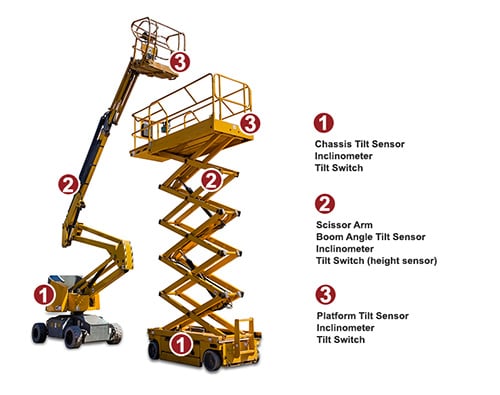 Over the past several decades, advances in design of both the MEWP and its control system have made the devices measurably safer. Data from IPAF, the International Powered Access Federation—the industry trade group for the manufacturers of MEWPs—shows clearly that there has been a reduction in the number and severity of accidents in the past decade.

SAIA, the Scaffold and Access Industry Association, is the ANSI standards-making body for MEWPs, and they have devised and published a new standard, ANSI A92.20/22/24, as the North American standard for MEWPs. In addition, the European community has promulgated its own standard, which is very similar to the SAIA standard: EN280:2013+A1—as the European Safety Standard for MEWPs. Both standards require improved control over height and tilt, as well as providing for controls that have safeguards against involuntary motion, ascent, or descent.

These standards are expected to come into effect in early 2017, and manufacturers and users of MEWPs are looking at the types of sensors that will be needed to conform to the standards.

The height sensor inclinometer on a scissor lift is used to measure the scissor leg angles and derive the height of the platform. With the output of other sensors, the platform load can be calculated and displayed. This ensures that the platform is not overloaded, which is a major safety concern. The tilt switches on the chassis and the platform are intended to function as adjustable alarm trips.

So how does an inclinometer work? There are two basic types of inclinometers, or tilt sensors. One is a MEMS device, but for MEWPs, the most commonly used are electrolytic tilt sensors because of their repeatability and robustness in harsh conditions, such as those found in construction. Single axis sensors act just like a banana level, with three electrodes (a common and two outer electrodes), while dual axis sensors act like a small tank with fluid in it. The dual axis sensor has five electrodes (a common and four outer). As the fluid is tilted, the fluid inside the level covers a portion of the outer electrodes depending on the direction of tilt. This causes the conductive path to present a ratio between the electrodes, which can be compared to a potentiometer with the wiper being the common electrode. Inclinometers can be supplied with either analog outputs or CAN Bus J1939 digital outputs (among others) that can be interfaced with an existing network in a vehicle. Tilt switches are supplied with relay outputs or open collector outputs, and can be programmed via digital interfaces.

The issue is safety. With inclinometers and tilt switches like those manufactured by The Fredericks Company, a woman-owned enterprise with over 80 years of experience in design and manufacturing, the MEWP manufacturer and end user can be sure that their lift can conform to the new standards from the EC and ANSI.

By posting a comment you confirm that you have read and accept our Posting Rules and Terms of Use.
Advertisement
RELATED ARTICLES
Which Aerial Lift Do You Need on Your Job?
Bosch Rexroth introduces its hydraulic load-sensing valves
Longest self-propelled telescopic boom lift to launch at ConExpo 2020
Watch How Aircraft Engines are Cleaned with CO2 Pellets
Video: Case debuts its compact dozer loader
Advertisement