While commercial air purifiers are designed to remove the small particles present in soot, smoke, or car exhaust, a soy-based filter developed by researchers from the U.S. and China captures hazardous gaseous molecules that escape these more high-tech systems. 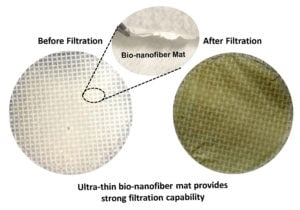 The biomaterial provides strong air filtration capability. Credit: Washington State UniversityCommonly used air filters are usually made of micron-sized fibers of synthetic plastics and physically filter small particles but aren’t able to chemically capture gaseous molecules such as carbon monoxide, formaldehyde, sulfur dioxide, and other volatile organic compounds. Often they are made of glass and petroleum products, which can lead to secondary pollution.

The research team from University of Science and Technology, Beijing, and Washington State University used a pure soy protein and bacterial cellulose to produce an all-natural, biodegradable, inexpensive air filter. These materials are already used in numerous applications, including adhesives, plastic products, and wound dressings.

Soy contains a large number of functional chemical groups, each of which has the potential to capture passing pollution at the molecular level. The researchers used an acrylic acid treatment to disentangle the very rigid soy protein, so that the chemical groups can be more exposed to the pollutants.

The resulting filter was able to remove nearly all of the small particles as well as chemical pollutants during tests.

By posting a comment you confirm that you have read and accept our Posting Rules and Terms of Use.
Advertisement
RELATED ARTICLES
Soy Filter Captures Toxic Chemicals Others Can’t
Engineering Team Develops Nanofiber Solution for Clean, Fresh Air
Achieve maximum system performance and efficiency with Dusthog®
Team develops a nanocoating for air filters capable of trapping COVID-19
How does a HEPA filter work?
Advertisement