Researchers at the Technion – Israel Institute of Technology have demonstrated that laser emissions can be created through the interaction of light and water waves. This “water-wave laser” could someday be used in tiny sensors that combine light waves, sound and water waves or as a feature on microfluidic “lab-on-a-chip” devices used to study cell biology and test new drug therapies.

The study was carried out under the supervision of Professor Tal Carmon, head of the Optomechanics Center at the Mechanical Engineering Faculty at Technion. Carmon says the study is the first bridge between two areas of research that were previously considered unrelated to one another: nonlinear optics and water waves. 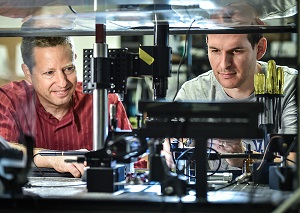 Professor Tal Carmon (l), head of the Optomechanics Center at the Mechanical Engineering Faculty at Technion, and graduate student Shai Maayani. Image credit: Technion – Israel Institute of Technology. A typical laser can be created when the electrons in atoms become “excited” by energy absorbed from an outside source, causing them to emit radiation in the form of laser light. Professor Carmon and his colleagues have now shown that water-wave oscillations within a liquid device can also generate laser radiation.

To compensate for this low efficiency, the researchers created a device in which an optical fiber delivers light into a tiny droplet of octane and water. Light waves and water waves pass through each other approximately one million times inside the droplet, generating the energy that leaves the droplet as the emission of the water-wave laser.

A drop of water is a million times softer than the materials used in current laser technology, the researchers note. The minute pressure applied by light can therefore cause droplet deformation that is a million times greater than in a typical optomechanical device, which may offer greater control of the laser’s emissions and capabilities, according to the Technion scientists.

By posting a comment you confirm that you have read and accept our Posting Rules and Terms of Use.
Re: Water-Weave Laser Developed
#1

John, you may wish to edit this line,

(4×1014 Hz is the frequency of red light whilst 8×1014 Hz is that of violet light, and between these are all the other colours of the visible spectrum)

the title has a typo of an superfluous 'e' that needs an edit. This is a 'water wave laser'.