Terahertz Waves: Poised for a Breakthrough?

Somewhere between light waves and radio waves lies a relatively unexplored part of the electromagnetic spectrum made up of terahertz frequencies. Researcher James Kolodzey of the University of Delaware calls this part of the spectrum the “final frontier” in the study of electromagnetic waves.

Now Kolodzey, who teaches electrical and computer engineering, and other researchers are exploring ways to put those frequencies to practical use in the medical, security, and hazardous waste industries, among others.

Their focus is on terahertz radiation, or T-rays. These waves are too long for the eye to see and inhabit what’s known as the “terahertz gap,” the part of the spectrum unoccupied by microwaves and infrared light waves. Terahertz frequencies are some 1,000 times higher than microwave frequencies but 100 to 1,000 times lower than visible light, Kolodzey says.

Indeed, researchers have long thought terahertz frequencies offered no practical modern-day use. But that may change as researchers uncover ways that terahertz could be of great value for close-range applications.

Don Arnone, CEO at TeraView based in Cambridge, England.In fact, during the past few years, the terahertz frequencies have been actively investigated for see-through imaging and materials identification, says Don Arnone, CEO at TeraView, of Cambridge, England. The company makes instruments that emit terahertz light to characterize a range of materials and also provides consulting services.

A Range of Applications

Unlike radio waves that travel through objects, terazhertz frequencies are partially absorbed by objects, including the human body. Kolodzey and his team realized that a dentist, for example, could use terahertz-powered technology to take a picture of the inside of a patient’s teeth the way an X-ray does. But terahertz isn't as harmful to humans because they emit at lower energy levels.

Terahertz technology also produces faster results than X-ray. Other possible uses might be for the non-destructive, internal, chemical analysis of many different types of materials, he says. 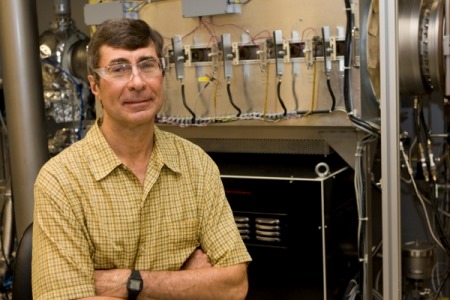 James Kolodzey in his lab at the University of Delaware.“The region we call terahertz interacts with molecules and chemicals and biological agents in the air; there are interesting resonances and dispersions,” Kolodzey says. That may make them ideal for sensing the chemical composition of the environment. And that, in turn, may offer a practical use for analysis and measurement.

Even so, for electrical engineers and others, harnessing the power of the T-ray for use in real-world applications has proved challenging. For one thing, the rays themselves occupy a region on the electromagnetic spectrum too high to be measured digitally. For another, the same electronic devices that generate radio waves can’t generate or modulate T-rays.

But recent advances may address those shortcomings, says Yuen-Ron Shen, professor emeritus of physics at the University of California, Berkeley. “The field, covering an important spectral region for material characterization, suffered badly from poor light sources and detectors in the old days, but blossomed rapidly after the arrival of femtosecond lasers,” Shen says.

Yuen-Ron Shen, professor emeritus of physics at the University of California, Berkeley.The femtosecond laser is an infrared laser with a wavelength of 1,053 nano millimeters, making it capable of generating T-rays, Shen told a 2015 conference on Infrared, Millimeter and Terahertz Waves in Hong Kong.

Typically, the pulse from such a laser is split in two. One part travels to the terahertz emitter, and the second part travels to the detector after first interacting with a sample, according to Toptica Photonics of Gräfelfing, Germany, which sells lasers for terahertz generation. A Fourier transform of the terahertz amplitude trace then produces the sample’s terahertz spectrum. (A Fourier transform decomposes a function of time into the frequencies that make it up.)

What’s more, Kolodzey and his team at Delaware are working on a family of devices that emit power in the terahertz range. Those emitting devices are more efficient and smaller than previous devices—like the laser—and are portable. They are being investigated for transmitting imaging through solid objects for the identification of materials, and for medical diagnostics and cancer research, he says.

The University of Delaware devices are compact and portable. The researchers are now improving the device’s structure so it emits terahertz at even higher levels and uses less energy. The devices are based on silicon carbide with germanium semiconductors and are roughly the size of a cellphone. The semiconductor is used to select specific terahertz energy bands. A waveguide corrals and distributes the signal in the manner of a laser pointer.

Like sonar or radar, terahertz imaging produces an image by comparing measurements across an array of sensors. Those arrays have to be very dense, because the distance between sensors is proportional to wavelength.

“Our goal is to make the device usable and affordable,” Kolodzey says.

Medical applications are also being investigated. For example, the skin of a cancer patient seems to have strong resonances in the terahertz region, Kolodzey says. This may open a medical application that highlights cancerous areas of the skin. In the future, a doctor might move a handheld device over the patient's skin and take readings to test for cancer.

“In terahertz there's no word for different colors, but certain wavelengths can distinguish cancers,” Kolodzey says. “If you have tooth decay or if there's a chemical spill in the ground, wavelengths show that.” Chemicals have different terahertz resonances and responses. The emitter illuminates those resonances and a detector can tell the user the chemical makeup of the area over which the emitter is passed. He says it might be possible to identify the chemical composition of a spill from many feet away. 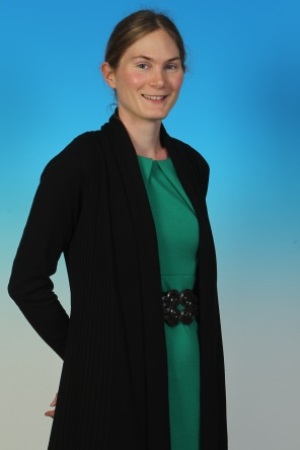 While at TeraView, she helped develop a computer model that simulated the interaction of terahertz radiation with water. By measuring how terahertz pulses were reflected from the forearm and palm skin of volunteers, Pickwell-MacPherson and others were able to distinguish between dry and normal skin.

They found that their simulation method was able to successfully model the interaction of terahertz light with normal skin. They say this may be a first step in exploring how terahertz images might be used to identify skin cancers. She’s also shown that terahertz imaging done on tissue samples from patients can detect the difference between healthy breast tissue and cancerous tissue.

“Our results indicate that terahertz can be used to distinguish between healthy adipose breast tissue, healthy fibrous breast tissue and breast cancer due to the differences in the fundamental optical properties,” she wrote in a paper on the subject.

The “terahertz gap” seems to be closing as researchers hone in on harnessing the waves for everyday use.

By posting a comment you confirm that you have read and accept our Posting Rules and Terms of Use.
Advertisement
RELATED ARTICLES
The Technology of Metamaterials
Wearable Terahertz Scanner Made with Carbon Nanotubes
Step Forward for Practical Terahertz Technology?
Microscopy method appraises photovoltaic materials
Device Could Strengthen Security Screening Capabilities
Advertisement