The Race for More Efficient Engines

The search for better-performing engines powered by less-polluting fuels may benefit from a new modeling technique developed at King Abdullah University of Science and Technology (KAUST).

Aamir Farooq and colleagues from KAUST’s Clean Combustion Research Center, working with the Fuel Technology Team at Saudi Aramco, have devised a novel method for testing the properties of light naphtha, a fully blended, low-octane, highly paraffinic fuel. Farooq says that use of the technique could help open the door to the development of more advanced engines that run on fuels that release fewer greenhouse gas emissions. 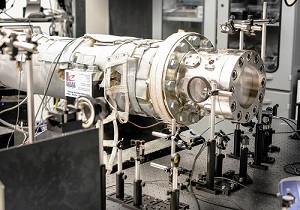 End view of the shock tube used to model the auto-ignition properties of light naphtha. Image credit: ©KAUST. Compression-ignition and spark-ignition engines, commonly referred to as diesel and gasoline engines, have fuel efficiencies of only 35%-40%. A newer engine design, called a gasoline compression-ignition (GCI) engine, however, promises efficiencies of up to 55%, as well as the release of fewer harmful soot and nitrogen oxides compared with current engines. But realizing these benefits requires a fuel with auto-ignition properties somewhere between gasoline and diesel.

“The auto-ignition properties determine the performance of the engine and so have a significant influence on the engine’s design,” says Farooq. “Like all fuels, light naphtha contains hundreds of compounds. So to perform detailed engine optimization, we need a simpler model of the fuel, called a surrogate fuel.”

The researchers compared auto-ignition properties of light naphtha with two surrogates—a simple, primary reference fuel surrogate and a more complex surrogate—over a range of temperatures, pressures and fuel/air ratios. Operating at high temperatures, they first used a shock tube to study the auto-ignition behavior of the surrogates over different pressures. However, at lower temperatures, reactions take longer, so a rapid-compression machine was used to extend the observation time for the reactions.

They found the complex surrogate matched the light naphtha almost perfectly, particularly at lower temperatures, providing a full picture of its auto-ignition characteristics.

“Our work has produced the first auto-ignition model for light naphtha and is being used by Saudi Aramco’s research center in Detroit to optimize GCI engine designs,” says Farooq.