Fuels for an experimental engine technology that could consume 25 percent less energy than a conventional automobile engine were evaluated by researchers from Saudi Aramco and King Abdullah University of Science and Technology (KAUST). A gasoline-type fuel is used in gasoline compression ignition (GCI), but ignition is not triggered by a spark. The engine is compression-ignited as in a diesel system, suggesting that GCI could beneficially combine the fuel efficiency of diesel engines with the low nitrogen oxides and soot-particle emissions of gasoline. 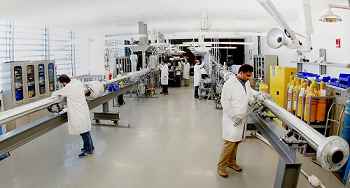 “To optimize the performance of GCI engines, we used high-fidelity predictive computer simulations,” explains Aamir Farooq of KAUST’s Clean Combustion Research Center. “A big part of such simulations is the description of fuel chemistry.” As a real gasoline fuel is too complex a chemical mixture to simulate, “… we try to formulate a simpler representation of the real fuel, known as a surrogate.”

Major modifications in refinery infrastructure will be needed to bring low-octane fuels to market, but low-octane fuels could be made available in the near-term by combining conventional fuels. The researchers are now examining the feasibility of mixing diesel and gasoline fuels to match the characteristics of a low-octane gasoline.

By posting a comment you confirm that you have read and accept our Posting Rules and Terms of Use.
Advertisement
RELATED ARTICLES
The Race for More Efficient Engines
Watch: Separation process brings fuel economy and emissions control together
High-performance Biofuel Claimed by Enerkem-NREL Team
Fuel Dispensing Equipment & Operation
"Premium" Gas Does Not Necessarily Improve Performance
Advertisement