Cape Sharp Tidal, a partnership between Emera and OpenHydro/DCNS, has deployed a two-megawatt turbine at the Fundy Ocean Research Center for Energy (FORCE) test site, near Parrsboro. The demonstration open-center turbine was designed and manufactured by OpenHydro. 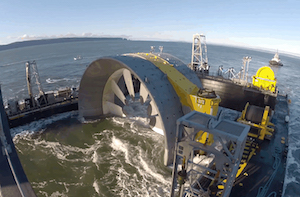 The tidal turbine is immersed below the sea. Image credit: FORCE.A second turbine, planned for deployment in 2017, will make Cape Sharp Tidal one of the largest generating arrays in the world. The completed four-megawatt demonstration project will displace the need to burn about 2,000 metric tons of coal and eliminate 6,000 tons of greenhouse gas emissions, the equivalent of taking 1,000 cars off the road each year.

“In two hours within one tidal cycle, we deployed an open-center turbine in the Bay of Fundy and, soon after, secured the export of power to the Nova Scotian grid," says Thierry Kalanquin, chairman of OpenHydro.

The turbine harnesses only a fraction of the energy potential of the Minas Basin, where the mean spring tidal range is 14.5 meters (47.6 feet). During a flood tide, 160 billion tons of seawater flows into the Bay of Fundy—more than four times the estimated combined flow of all the world’s freshwater rivers during the same 6-hour interval. Tidal currents exceed 10 knots at peak surface speed.

As part of the project, FORCE is collecting data on sound, fish and marine mammals. Monitoring reports will be shared with regulators and the public and contribute to a growing international body of research.

By posting a comment you confirm that you have read and accept our Posting Rules and Terms of Use.
Advertisement
RELATED ARTICLES
Scottish Tidal Project Shatters Generation Records at Testing Site
Video: Tidal power charges EVs in Scotland
Platform designed to produce hydrogen from tidal power
Is the ocean blue a green power source?
Tidal Energy Turbine Deployed off Scottish Coast
Advertisement