Wax Could Be Safe Storage Material for Hydrogen Vehicles

Hydrogen is often described as the fuel of the future, particularly when applied to hydrogen-powered fuel cell vehicles. One of the primary obstacles to the adoption of this technology—a potential solution for sustainable transportation—has been the lack of a lightweight, safe onboard hydrogen storage material.

Now, scientists from the universities of Oxford, Cambridge and Cardiff, in the UK, and the King Abdulaziz City for Science and Technology, in Saudi Arabia, have shown that hydrocarbon wax rapidly releases large amounts of hydrogen when activated with catalysts and microwaves. They believe their discovery could potentially yield a safe hydrogen storage method. 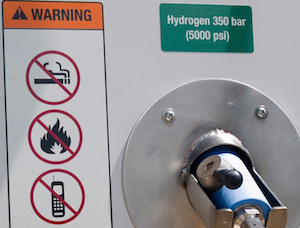 The lack of a safe onboard hydrogen storage material has been an obstacle to the adoption of hydrogen-powered vehicles. Image credit: Oxford University. Hydrocarbons are natural, hydrogen-rich resources with well-established infrastructures. The research team has developed highly selective catalysts with the assistance of microwave irradiation that can extract hydrogen from hydrocarbons instantly through a non-oxidative dehydrogenation process.

"Our discovery—that hydrogen can be easily and instantly extracted from wax, a benign material that can be manufactured from sustainable processes—is a major step forward," says Dr. Tiancun Xiao, senior research fellow at Oxford. "Wax will not catch fire or contaminate the environment. It is also safe for drivers and passengers."

The researchers believe the work could be extended so that many of the liquid components of refined petroleum and inexpensive solid catalysts can be utilized to help pave the way for the generation of large quantities of high-purity hydrogen for other commercial uses, including CO2-free energy production.

"Instead of burning fossil fuels, leading to CO2, we use them to generate hydrogen, which with fuel cells produces electric power and pure water," says Peter Edwards, professor of inorganic chemistry at Oxford.

By posting a comment you confirm that you have read and accept our Posting Rules and Terms of Use.
Advertisement
RELATED ARTICLES
Hydrogen energy storage systems
Safer Methods for Hydrogen Production
The World's First Mobile Liquid Hydrogen Fueling Station
New Route for Hydrogen Storage and Transport
New Catalyst Could Lead to Cheaper Hydrogen Fuel Cells
Advertisement