High-performance thermoplastics (HPTPs) are specialized polymers used for demanding applications, largely due to their thermal resistance in comparison to engineering thermoplastics (ETPs) such as nylons and polycarbonates (PC). One tradeoff, however, is that their prices are often higher.

“When designing a product, companies will choose the cheapest material that meets their needs; an expensive HPTP like Polyetherimide (PEI) or Polyetheretherketone (PEEK) is not freely chosen if a cheaper ETP like PC can suffice.”

A thermoplastic is a plastic type made from polymer resins that becomes hard when cooled and a homogenized liquid when heated. However, when frozen, it becomes glass-like and easily fractures. A variety of thermoplastics exist, with each type varying in crystalline structure and density.

HPTPs are also typically defined as high-temperature thermoplastics with a melting point above 150 °C.

“A high melting point for a thermoplastic correlates with other important characteristics such as mechanical strength and chemical resistance/inertness,” says Vicari. 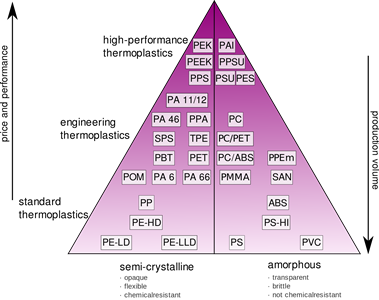 (Click to enlarge.) Thermoplastic performance pyramid.Commodity thermoplastics, ETPs, and HPTPs fall into a structure often depicted as a “thermoplastic performance pyramid” with HPTPs at the top. Vicari says that, in general, the higher the performance of the polymer, the higher its price and location on the pyramid. The pyramid itself is divided into four stages with each stage split into two categories: amorphous and semi-crystalline. The four stages of plastics from bottom to top are: commodity, engineering, high temperature, and extreme temperature.

Over time, advances in polymer quality, polymer processing, and product design are improving the performance of ETPs. This may blur the distinction between the higher performing ETPs like PC and the lower performing HPTPs like Polysulfone (PSU), making substitutions possible in some cases, says Vicari. The average yearly global growth rates for the major ETPs are around 4%.

“Demand for polymers in general continues to rise, and with that the demand for HPTPs,” Vicari says. “Across a broad spectrum of applications, companies continue to demand higher performing products, requiring higher performing materials.”

For example, PEEK is a linear thermoplastic that can be processed in a temperature range of 350-420°C with excellent chemical and temperature resistance and mechanical strength. It has applications in environments such as nuclear and chemical plants, oil and geothermal wells, and high-pressure steam valves. Major manufacturers include Victrex, Solvay, Evonik, and Arkema.

Over the past three decades, the use of plastics in automotive applications has grown due to their light weight and, therefore, superior fuel efficiency in comparison to metal. HPTPs and ETPs also offer more design flexibility, helping to reduce development time and cost. Current trends are mainly influenced by cost and weight reduction, environmental considerations, and recycling from end-of-life vehicles.

At present, only some ETPs like polycarbonate can be recycled. “In general, recycling results in some loss of material properties compared to virgin material, so recycled plastics are used in less demanding applications,” says Vicari.

The HPTP market faces several challenges. First, companies discover and bring to market new polymers only rarely. Most advances are developments of new grades or blends of existing polymers.

Second, only a few markets like aerospace and oil and gas can support the costs associated with the highest performing polymers. This limits growth for those materials at the high end, while improvements in ETP performance outlined earlier limit growth at the low end of the HPTP market.

On the other hand, opportunities include growth in the fiber reinforced composites market, efforts toward light weighting in aerospace and transportation, and 3-D printing. In the case of 3-D printing, intrinsically high HPTP performance can compensate for the lower quality of print versus molded plastics.

The thermoplastics fabrication industry has been evolving for decades, starting at least in 1926 with production of one of the first commercial inject molding machines by Ziegler and Eckert.

Typically, a fabrication process depends largely on the end-use application and required properties of the product. For example, applications in the automotive, manufacturing, and electronics sectors rely on injection molding and to a growing extent 3-D printing. Meanwhile, food and medical applications use thermoforming. Other technologies include blown film, compounding, and extrusion.

Potential entrants to the thermoplastic fabrication industry are likely to face various road-blocks along with a few opportunities depending on the type of technology they choose. In general, limiting factors according to the consultancy Nexant include: rising environmental concerns along with stringent government standards and regulations, higher power costs corresponding to increased throughput, and inter-polymer resin competition for injection molded applications.

Over the last decade, interest in 3-D printing has increased resulting in growing competition among developers, says Nexant. Despite the potential market, limited materials and initial high capital investment costs associated with 3-D printers can be constraining factors. Regardless, 3-D printing offers the potential for ongoing technology advancement driven by printer performance, multi-material compatibly, and capability to yield finished products.

Compounds can almost always be designed to match a customer's needs better and, sometimes, at a lower cost compared to uncompounded resins or non-polymer based materials. Commonly, polymers are compounded for injection-molding applications with the addition of fibers or mineral fillers for reinforcement along with a range of several plastics additives such as impact modifiers, lubricants, thermal and ultraviolet (UV) stabilizers, pigments, and other materials.

The late 1940s and 1950s marked the emergence of injection molding as commercialization of large-volume thermoplastic resins took place. The process offers several advantages, including high production rates, low labor costs, and minimal scrap losses, among others. However, expensive molds and equipment are a disadvantage as molds often cannot be readily interchanged between different plastics.

Simply put, the injection molding process involves placing plastic pellets in an extruder, allowing them to melt and take the shape of the mold cavity, where the melt is cooled and solidified. This process occurs in cycles, with each cycle ejecting a specified number of plastic parts per the number of cavities in the mold.

Lastly, the largest market for injection molded plastics is Asia, specifically China, with North America and Western Europe also presenting market opportunities. Currently, the automotive industry is driving demand as plastics weigh lighter than other materials that makeup a vehicle.

According to Nexant, thermoplastics consumption by injection molding in North America was roughly 9 million tons in 2014.

By posting a comment you confirm that you have read and accept our Posting Rules and Terms of Use.
Advertisement
RELATED ARTICLES
New thermoplastic rubber with high impact punch
10 Kinds of Thermoplastics and What You Can Do With Them
Thermoplastic composites manufacturing process advances
High-performance plastics for 3D printing
Moving Away From Metals
Advertisement