Scientists have demonstrated an efficient method for wirelessly transferring power to a drone while it is flying. The technology could in theory allow flying drones to stay airborne indefinitely simply by hovering over a ground support vehicle to recharge—potentially opening up new industrial applications.

The technology uses inductive coupling, a concept initially demonstrated by inventor Nikola Tesla over a century ago. Two copper coils are tuned into one another electronically, which enables the wireless exchange of power at a certain frequency. 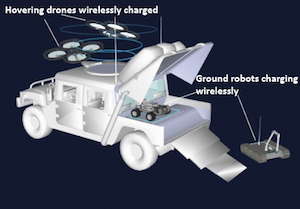 The technology could potentially allow flying drones to stay airborne indefinitely simply by hovering over a ground support vehicle to recharge. Image credit: Imperial College London.To demonstrate the technology, engineers from Imperial College London removed the battery from an off-the-shelf mini-drone and demonstrated that they could wirelessly transfer power to it to keep it aloft. They believe their demonstration is the first to show how wireless charging via inductive coupling can be carried out efficiently with a flying object such as a drone.

To achieve the feat, after removing the battery from the 12 cm-diameter quadcopter drone, the researchers altered its electronics and made a copper foil ring to act as a receiving antenna encircling the drone's casing. On the ground, a transmitter device made out of a circuit board was connected to the electronics and a power source, creating a magnetic field.

The technology is still in its experimental stage, the researchers say, as the drone can currently fly only 10 cm above the magnetic field transmission source. The team estimates they are one year away from a commercially feasible product.

The use of small drones for commercial purposes—for surveillance, reconnaissance missions and search-and-rescue operations—is growing rapidly. However, the distance that a drone can travel and the duration it can stay in the air are limited by the availability of power and recharging requirements. Wireless power-transfer technology may solve this, the team says.

"Imagine using a drone to wirelessly transmit power to sensors on things such as bridges to monitor their structural integrity," says Paul Mitcheson, professor in the Department of Electrical and Electronic Engineering. "This would cut out humans having to reach these difficult-to-access places to recharge them."