A Dartmouth College-led team has developed a smartwatch prototype that uses the wrist as an always-available joystick to perform common touchscreen gestures when one's hands are occupied.

WristWhirl was built from a 2" TFT display and a plastic watch strap augmented with 12 infrared proximity sensors and a Piezo vibration sensor placed inside the wrist strap, which is connected to an Arduino DUE board, a type of microcontroller board. The device provides a method for one-handed continuous gestural input for smartwatches. 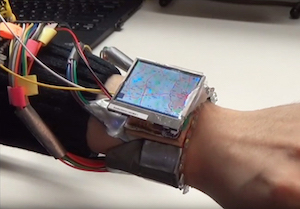 WristWhirl allows users to interact with a smartwatch using the wrist that the watch is worn on, while freeing up the other hand for other tasks. Image credit: Dartmouth College.To develop the WristWhirl prototype, the researchers investigated the biomechanical ability of the wrist by tasking a small group of participants to conduct eight joystick-like gestures while standing and walking. Participants were asked to use their wrist to make four directional marks similar to flicking a touchscreen, as well as four free-form shapes, such as a triangle. The participants made these gestures with their hand up in front of their body, during which they could see the gesture being drawn on the watch's screen, and with their hand down alongside their body.

To measure the accuracy of the free-form paths drawn using WristWhirl, the researchers used the $1 gesture recognizer and found that it was able to recognize the marks with 93.8% accuracy, as compared to 85% accuracy by three human inspectors.

"While other studies have explored the use of one-handed continuous gestures using smartwatches, WristWhirl is the first to explore gestural input," says Xing-Dong Yang, assistant professor of computer science. "Technology like ours shows what smartwatches may be able to do in the future, by allowing users to interact with the device using one hand (the one that the watch is worn on), while freeing up the other hand for other tasks."

By posting a comment you confirm that you have read and accept our Posting Rules and Terms of Use.
Advertisement
RELATED ARTICLES
New Sensor Increases Smartwatch Battery Life
AI Controls Motorized Wheelchair via Facial Expressions
Smart ring wearable may enable users to control devices with just a finger
Wrist Watches Made from Classic Cars
Ultrasound Technology Could Help Make Hands Touchscreens
Advertisement