Blood testing is the standard option for checking glucose levels, but a new technology could allow non-invasive testing via a contact lens that samples glucose levels in tears.

“There’s no non-invasive method to do this,” says Wei-Chuan Shih, associate professor of electrical and computer engineering at the University of Houston (UH). “It always requires a blood draw. This is unfortunately the state of the art.”

But glucose is a good target for optical sensing and particularly for what is known as surface-enhanced Raman scattering spectroscopy, Shih says. Named for Indian physicist C.V. Raman, who discovered the effect in 1928, surface-enhanced Raman scattering uses information about how light interacts with a material to determine properties of the molecules that make up the material. 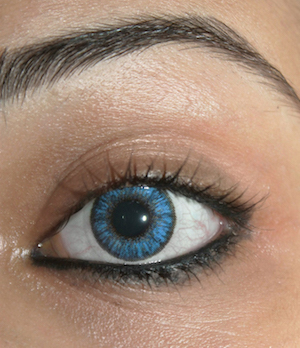 The researchers' layered nanoarray was produced on a hard substrate but lifted off and printed onto a soft contact. Image credit: Pixabay. Together with colleagues at UH, the Korea Institute of Science and Technology and the Korea Advanced Institute of Science and Technology, Shih developed a tiny device—built from multiple layers of gold nanowires stacked on top of a gold film and produced using solvent-assisted nanotransfer printing—that optimizes the use of surface-enhanced Raman scattering to take advantage of the technique’s ability to detect small molecular samples.

The device enhances the sensing properties of the technique by creating “hot spots,” or narrow gaps within the nanostructure, to intensify the Raman signal, according to the researchers.

To demonstrate the versatility of the technology, they created a glucose-sensing contact lens. As glucose is present not only in the blood, but also in tears, tracking glucose levels in human tears by employing a contact lens-type sensor is a logical approach for non-invasive blood glucose monitoring, the researchers say.

While scientists know that glucose is present in tears, Shih says that how tear glucose levels correlate with blood glucose levels hasn’t yet been established. The more important finding, he says, is that the device is an effective mechanism for using surface-enhanced Raman scattering spectroscopy.

And while traditional nanofabrication techniques rely on a hard substrate—usually glass or a silicon wafer—Shih says he and his research colleagues wanted a flexible nanostructure that would be more suited to wearable electronics. Thus, their layered nanoarray was produced on a hard substrate but lifted off and printed onto a soft contact, he says.

By posting a comment you confirm that you have read and accept our Posting Rules and Terms of Use.
Advertisement
RELATED ARTICLES
A spectroscopic approach to painless glucose monitoring
Non-invasive Glucose Tests
Glucose-Monitoring Technique Relies on Optical Technology
Wearable Patch Monitors Sweat, Treats Diabetes
Fundamentals of glucose monitoring sensors
Advertisement