Scientists at Oxford University have developed a solvent with reduced toxicity that can be used in the manufacture of perovskite solar cells, clearing one of the primary barriers to their commercialization.

Perovskites—a family of materials with the crystalline structure of calcium titanate—have been shown to be almost as efficient as silicon in harnessing solar energy, as well as significantly cheaper to produce. Currently, however, the three solvents primarily used in the manufacture of perovskite solar cells are all toxic. 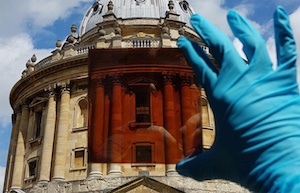 Perovskite-based solar cells already compete on an efficiency basis against established solar materials such as multi-crystalline silicon. Image credit: Oxford University. Moreover, the most efficient perovskite solar cells are now made through a process called solvent quenching, a technique that is not easily transferred from lab-scale to large-scale deposition techniques. While vapor deposition of these materials can overcome this problem, it is an additional expense—and one of the main selling points of perovskite films is that they are cheap and can be easily solution processed.

Now, Oxford researchers have combined methylamine and acetonitrile to develop a clean solvent with a low boiling point and low viscosity that quickly crystallizes perovskite films at room temperature and could be used to help coat large solar panels with the material.

"What is really exciting about this breakthrough is that largely reducing the toxicity of the solvent hasn't led to a reduction in the efficiency of the material in harnessing solar energy," says Dr. Nakita Noel, of the university's Department of Physics.

In recent years, perovskite-based solar cells have raced to the front of emerging photovoltaics, already competing on efficiency against well-established solar technologies such as the inorganic thin-film and multi-crystalline silicon used in solar panels around the world. Perovskites also have the shortest "energy payback time"—the duration required before a material saves the same amount of energy that was expended in its production.

"While we are probably still a few years from seeing perovskite-based solar panels on people's roofs, this is a big step along the way," notes Dr. Bernard Wenger, of Oxford’s Department of Physics.