Cell phones and Apple watches could last longer due to a new method to create copper nanowires.

A team of Lawrence Livermore National Laboratory (LLNL) scientists has developed a process for purifying copper nanowires with a near-100% yield. The research shows how the method can yield large quantities of long, uniform, high-purity copper nanowires that meet the requirements of nanoelectronic applications—and provide an avenue for purifying industrial-scale synthesis of copper nanowires, a key step for commercialization.

Functional nanomaterials are notoriously difficult to produce in large volumes with highly controlled composition, shapes and sizes. This difficulty has limited adoption of nanomaterials in many manufacturing technologies. 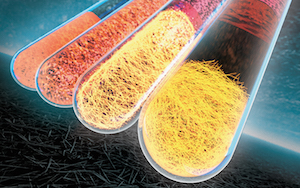 An illustration of the separation process from a mixture of various copper nanocrystal shapes (two tubes on the left) to pure nanowires and nanoparticles (two tubes on the right). Image credit: LLNL.The most common approach to create nanowires not only yields nanowires but also other low-aspect ratio shapes, such as nanoparticles and nanorods. These undesired byproducts are almost always produced due to difficulties in controlling the non-instantaneous nucleation of the seed particles as well as seed types, which cause the particles to grow in multiple pathways.

The key to the process developed at LLNL is the use of a hydrophobic surfactant in an aqueous solution, together with an immiscible water organic solvent system, to create a hydrophobic-distinct interface, allowing nanowires to cross over spontaneously due to their different crystal structure and total surface area from those of nanoparticles. The resulting copper nanowires carry no byproducts that would affect their shape and purity.

"The principles developed from this particular case of copper nanowires may be applied to a variety of nanowire applications," says LLNL staff scientist Fang Qian. "This purification method will open up new possibilities in producing high-quality nanomaterials with low cost and in large quantities."

The researchers say they envision using purified nanomaterials in a potentially wide variety of new fabrication approaches, including additive manufacturing.

By posting a comment you confirm that you have read and accept our Posting Rules and Terms of Use.
Advertisement
RELATED ARTICLES
Copper nanowire spray to combat the spread of diseases
Gold Nanowires Allow Operations at Cellular Level
Flexible Conductors for Commercial Use
Ultrathin Nanowires Composed of Diamondoids
Nanowire Calculator Is a Step Toward Optical Computers
Advertisement