A four-seat passenger aircraft powered by a hydrogen fuel cell system completed a 15-minute flight in late September, taking off and landing at Stuttgart Airport in Germany. The twin-fuselage HY4 was developed by the DLR Institute of Engineering Thermodynamics, Hydrogenics, Pipistrel, H2FLY, the University of Ulm, and Stuttgart Airport (watch the video). 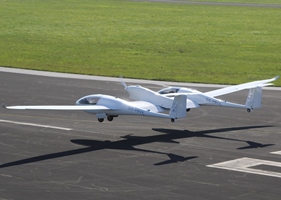 Developers say the significance of this is that if hydrogen is produced via electrolysis using power from renewable energy sources, the HY4 can fly while generating no emissions.

The aircraft has a motor output of 80 kilowatts, a maximum speed of approximately 200km/h, and a cruising speed of 145km/h. Depending on speed, altitude, and load, it can achieve a range of between 750-1500 km.

By posting a comment you confirm that you have read and accept our Posting Rules and Terms of Use.
Advertisement
RELATED ARTICLES
Clean energy in aerospace
Hydrogen is powering transportation everywhere
Fuel Cell Could Take on Aircraft Taxi Tasks
In-flight Hydrogen Production for Aviation
Regional Hydrogen-Electric Passenger Plane Under Development
Advertisement