Swedish engineers have developed a technique to shape and surface treat plastic parts at the same time. They say the process could reduce the cost of manufacturing medical devices and diagnostic tools. 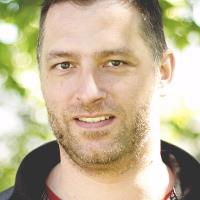 Wouter van der Wijngaart of KTH. Source: KTH Royal Institute of TechnologyWhen plastic components for lab-on-a-chip and other diagnostic devices are manufactured, they are first shaped by injection molding and then surface treated to attain the desired surface properties. Those surface properties, for example, may be an affinity for water or water repellency, says Wouter van der Wijngaart, professor of micro and nanosystems at KTH Royal Institute of Technology whose team developed the technique.

“When we mold plastic using the new method, we simultaneously define the different surface properties it should have,” he says. “Instead of needing to use several process steps, we now require only one.”

To do that meant coming up with both a new plastic and a way to simultaneously structure and surface-modify it. That came about from continued development of the super plastic Ostemer by Mercene Labs, a company spun off from KTH. Ostemer resins are a new family of UV and heat-cured thermoset polymers, known as OSTE-based polymers, developed specifically for the requirements of lab-on-chips and microfluidics manufacturing.

“The lab-on-a-chip components that we can fabricate with our new injection molding technique are meant to handle small amounts of liquid, in medical applications,” says van der Wijngaart. He says that such chips up to now have been expensive, and this has been an obstacle for the more widespread use of such technology in health care. "But if you can lower the production cost by half," he says, "hopefully the device price goes down as well, which facilitates diagnostic tools based on plastics and injection molding methods.”

By posting a comment you confirm that you have read and accept our Posting Rules and Terms of Use.
Advertisement
RELATED ARTICLES
Plastic injection molding
Linde Offers a Novel Approach to Gas Injection Molding
Machining vs Molding: Which is Better for Fabricating Plastic Parts?
Proto Labs Now Offers Rapid Insert Molding
A Disruptive and Scalable Alternative to Traditional Injection Molding
Advertisement