A research team at Kiel University, in Germany, has developed a method for changing the surface properties of metals without affecting the mechanical stability or other characteristics of the underlying metal. Based on an electro-chemical etching process, this “nanoscale sculpturing” allows metals such as aluminum, titanium and zinc to be permanently joined with nearly all other materials, become water repellent and improve their biocompatibility.

The potential spectrum of applications of these “super connections” is extremely broad, the researchers say, ranging from metalwork in industry to safer implants in medical technology. 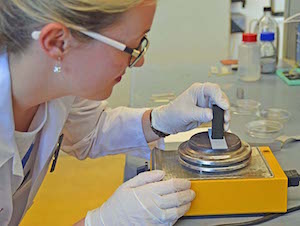 A strip of aluminum is permanently bonded with thermoplastic by heating. Image credit: Julia Siekmann/Kiel University.In the process, the surface of a metal is converted into a semiconductor, which can be chemically etched and thereby specifically modified as desired.

“As such, we have developed a process that—unlike other etching processes—does not damage the metals and does not affect their stability,” adds Professor Rainer Adelung, head of the Functional Nanomaterials team at the university's Institute for Materials Science (IMS). “In this way, we can permanently connect metals that could previously not be directly joined, such as copper and aluminum.”

According to the researchers, the surfaces of metals consist of many different crystals and grains, some of which are less chemically stable than others. These unstable particles can be specifically removed from the surface of a metal by targeted etching. The top surface layer is roughened by the etching process, creating a three-dimensional surface structure. This changes the properties of the surface, but not of the metal as a whole, because the etching is only 10 to 20 micrometers deep.

Through the etching process, a 3D structure with tiny hooks is created. If a bonding polymer is then applied between two treated metals, the surfaces interlock with each other in all directions like a three-dimensional puzzle.

The research team exposed the puzzle connections to extreme heat and moisture to simulate weather conditions. This also did not affect their stability. A beneficial side-effect of the process is that the etching makes the surfaces of metal water repellent.

The researchers believe that there is a broad range of potential applications for the technology, from metalworking industries such as shipbuilding and aviation to printing technology, fire protection and medical applications. Because the nanoscale-sculpturing process creates a 3D surface structure, which can be physically bonded without chemicals, the targeted etching can also remove harmful particles from the surface—potentially of great interest to medical manufacturers.

The researchers have applied for four patents relating to the process and report that businesses are showing significant interest in the technology's potential applications.