Researchers from King Abdullah University of Science and Technology (KAUST) have developed a process using a nanocrystalline material to make white light out of blue light. They say the approach could help combine lighting and communications systems into one.

While Wi-Fi and Bluetooth are now well-established technologies, advantages may be gained by shortening the wavelength of the electromagnetic waves used for transmitting information. So-called visible-light communication (VLC) makes use of parts of the electromagnetic spectrum that are unregulated, and that may be more energy efficient. VLC also offers a way to combine information transmission with illumination and display technologies—for example, using ceiling lights to provide internet connections to laptops. 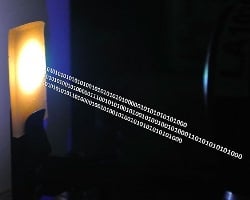 A nanocrystal-based material converts blue laser emission to white light for combined illumination and data communication. Image credit: KAUSTMany such VLC applications require light-emitting diodes (LEDs) that produce white light. That light is usually fabricated by combining a diode that emits blue light with phosphorous that turns some of this radiation into red and green light. However, this conversion process is not fast enough to match the speed at which the LED can be switched on and off.

“VLC using white light generated in this way is limited to about one hundred million bits per second,” says KAUST Professor of Electrical Engineering Boon Ooi.

The team created nanocrystals of cesium lead bromide roughly eight nanometers in size using what they say is a simple and cost-effective solution-based method that incorporates a conventional nitride phosphor. When illuminated by a blue laser light, the nanocrystals emit green light, while the nitride emits red light. Together, these combine to create a warm white light.

Using femtosecond transient spectroscopy, the researchers were able to show that the optical processes in cesium lead bromide nanocrystals occur on a time scale of roughly seven nanoseconds. This means that they could modulate the optical emission at a frequency of 491 Megahertz—40 times faster than is possible using phosphorus—and transmit data at a rate of two billion bits per second. Importantly, the white light generated using their perovskite nanostructures was of a quality comparable to current LED technology.

By posting a comment you confirm that you have read and accept our Posting Rules and Terms of Use.
Advertisement
RELATED ARTICLES
Solar panel technology used to detect dangerous gases
Researchers Tout LED That Is Reliable, Low Cost and Sustainable
Thermoreversible gel paves the way to programmable nanocrystal networks
New Low-Dimensional Nanomaterials Could Revolutionize Technology
Scientists turn to the chameleon to develop color-changing films
Advertisement