Volcanoes Could Hold the Key to Future Helium Finds

A new approach to gas exploration has resulted in the discovery of a huge helium gas field, a significant finding of this vital element, which is used in applications ranging from MRI scanners to welding, industrial leak detection and nuclear energy.

Typically, helium is not found intentionally but accidentally in small quantities during oil and gas drilling. A research group from Oxford and Durham universities, working with helium exploration company Helium One, has developed a method of exploration whose first use has resulted in the discovery of a world-class helium field in Tanzania. 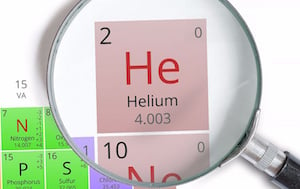 "We sampled helium gas (and nitrogen) just bubbling out of the ground in the Tanzanian East African Rift valley. By combining our understanding of helium geochemistry with seismic images of gas trapping structures, independent experts have calculated a probable resource of 54 billion cubic feet (BCf) in just one part of the rift valley," says Professor Chris Ballentine, of the University of Oxford's Department of Earth Sciences.

To put this discovery into perspective, global consumption of helium is about 8 BCf per year and the U.S. Federal Helium Reserve, which is the world’s largest supplier, has a current reserve of just 24.2 BCf. Total known reserves in the U.S. are around 153 BCf.

While volcanic activity likely provides the heat necessary to release the helium accumulated in ancient crustal rocks, if gas traps are located too close to a given volcano, the helium risks being heavily diluted by volcanic gases such as carbon dioxide, says Diveena Danabalan, of Durham University’s Department of Earth Sciences.

"We are now working to identify the ‘Goldilocks zone’ between the ancient crust and the modern volcanoes where the balance between helium release and volcanic dilution is 'just right,'" she says.

The researchers believe this same strategy can be applied to other parts of the world with a similar geological history to find new helium resources.

By posting a comment you confirm that you have read and accept our Posting Rules and Terms of Use.
Advertisement
RELATED ARTICLES
Helium Demand Is Forecast to Rise Through 2021
The dire demand for improved helium recapturing
Is Helium-4 a Harbinger of Seismic Activity?
Metal Nanocomposites May Tame Helium in Fusion Reactors
Plasma Produced in Wendelstein 7-X Fusion Reactor
Advertisement