Arlington, Texas, is employing a robot outfitted with sensors to detect structural flaws and obstructions in the city's sewer lines.

The MSI HD Profiler is a floating robot equipped with a high-definition video camera, as well as laser and sonar sensors, to analyze the interior conditions of large-diameter sewer pipes. It will help the Arlington Water Utilities Department evaluate 48 miles of sewer pipe over the next three years to prioritize which sections should be repaired or replaced first. 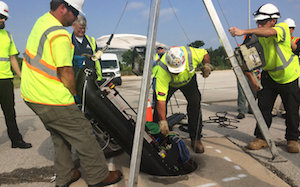 The floating robot is equipped with a high-definition video camera, as well as laser and sonar sensors, to analyze the interior conditions of large-diameter sewer pipes.“This data will help the city predict potential problems and make pre-emptive repairs at a lower cost and less impact to residents than waiting for a catastrophic failure,” Arlington Water Utilities Director Buzz Pishkur says.

The MSI HD Profiler’s high-definition camera and laser identify issues such as cracks or thinning pipe walls that can lead to catastrophic failures like street collapses or sewage leaks. Sonar beneath the floating robot collects data about conditions below the water line, such as debris and sediment buildup.

“When these pipes fail, they bring down roadways [and] cause serious problems,” says Ali Abolmaali, civil engineering professor at the University of Texas, Arlington, which is a partner on the three-year project. "Using the data obtained, we will be able to predict the remaining service life of the pipelines."

His team’s research will include comparing how the different types of sewer pipe perform while in service to how they performed when brand new. This data could help predict a pipe's lifespan and lead to recommendations to pipe manufacturers about improvements that could make their products more durable.