Researchers at the University of California, Riverside (UCR) and Purdue University are a step closer to developing super-strong composite materials, thanks to the mantis shrimp—a small marine crustacean that crushes the shells of its prey using a fist-like appendage called a dactyl club.

Their latest research, to be published in the journal Advanced Materials, describes a unique herringbone structure, not previously reported in nature, within the appendage’s outer layer called the impact region. It is this tough herringbone structure that not only protects the club during impact, but enables the mantis shrimp to inflict incredible damage to its prey. 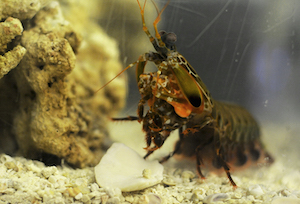 A mantis shrimp in the lab of David Kisailus. Image credit: Carlos Puma.The impact region is a crack-resistant layer that shields the club as the mantis shrimp pummels its prey. It consists of crystalline calcium phosphate surrounding heavily mineralized chitin fibers.

“We knew from previous studies that the impact region allows the mantis shrimp to transfer incredible momentum to its prey while resisting fracture, but it was exciting to reveal through our research that the properties of this highly impact-resistant material are created by the novel herringbone structure,” says lead researcher Nicholas Yaraghi, a graduate student of David Kisailus, UCR professor in energy innovation.

To confirm their hypothesis, Kisailus' team partnered with Pablo Zavattieri, associate professor of civil engineering at Purdue University, to perform finite element analyses to understand the role of these structures. The researchers also fabricated the herringbone structure using synthetic materials and a 3D printer.

“The smasher mantis shrimp has evolved this exceptionally strong and impact-resistant dactyl club for one primary purpose—to be able to eat," Kisailus says. "However, the more we learn about this tiny creature and its multi-layered structural designs, the more we realize how much it can help us as we design better planes, cars, sports equipment and armor.”

Kisailus says recent advances in 3D-printing techniques and modeling are making it easier than ever to translate the mantis shrimp’s weapon into new materials.

“By using 3D-printing techniques like those used by Zavattieri’s team, we can actually take what we’ve learned about the architecture of the dactyl club and manufacture new composites with traditional engineering materials like polymers and carbon fiber,” Kisailus says.

His team is already fabricating a second generation of composites incorporating not only the energy-absorbing component, but the stiff outer layer inspired by the mantis—producing a helmet with this hard coating.

By posting a comment you confirm that you have read and accept our Posting Rules and Terms of Use.
Advertisement
RELATED ARTICLES
Materials for Aerospace and Sports Inspired by the Mantis Shrimp’s Club
Shrimp Club Inspires Super Strong Composites
Watch: Mantis Shrimp’s Club Inspires New Tough Material
Watch: New 3D-printed Cement Gets Stronger During a Natural Disaster
A bug-like robot that can squeeze through just about anything
Advertisement