3D-Printed Membranes Could Advance the Technology

Scientists at Pennsylvania State University have created 3D-patterned membranes that they believe will help lead to advances in membrane technology.

Although today’s membranes are thin flat sheets of polymer, recent work has shown that by creating a 3D pattern on top of the polymer substrate, hydrodynamic properties emerge that may improve ion transport or mitigate fouling. However, making these profiled or patterned membranes involves etching a silicon mold with the desired pattern, pouring in polymer and waiting until it hardens. The process can be time-consuming and expensive, and results in a single pattern type. 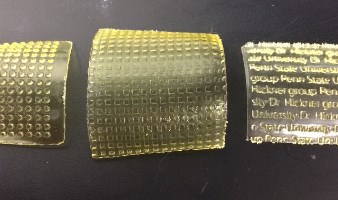 Membranes created with 3D printing. Image source: Penn State University By using 3D printing to fabricate custom-synthesized ion exchanged membranes, the team says they could create almost any type of pattern quickly and inexpensively. The team developed a custom 3D photolithographic printing process that is similar to 3D stereolithography. The research team used a photocurable mixture of ionic polymers and exposed the mixture under a light projector to harden the base layer.

More polymer was added to the base layer and projected a pattern on the new material to selectively harden the surface. The surface pattern increases the conductivity of the membrane by a factor of as much as two or three.

The team continues to tune the geometry and chemistry of the membranes they print, and learn to print new materials for membranes and other applications. Ion exchange membranes are utilized in a variety of energy applications: fuel cells and batteries, as well water purification, desalination, heavy metals removal and food processing.