Fishermen's Energy of New Jersey plans to install six 4-megawatt Siemens turbines in state waters approximately three miles off the coast of Atlantic City. The windfarm will demonstrate the use of a twisted jacket foundation that is easier to manufacture and install than traditional foundations, potentially helping to drive down the cost of energy produced by the offshore wind system, according to DOE. 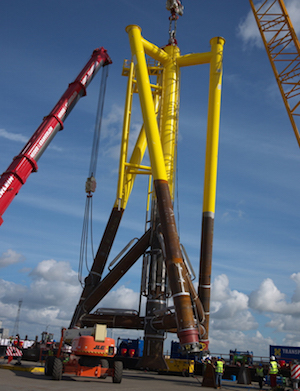 Keystone Engineering's twisted jacket foundation is easier to manufacture and install than traditional foundations. Image credit: Keystone Engineering. To ensure the safety of the workers who will service the offshore turbines, Fishermen's has teamed up with foundation developer Keystone Engineering to demonstrate a new access ladder that is rotated 90 degrees, bringing the maintenance vessel closer to the turbine foundation, while allowing workers to side-step onto the ladder.

The Mono Bucket foundation was selected after significant engineering analysis and is expected to reduce installation time, costs and environmental impacts compared to traditional foundations that require pile driving. According to DOE, the Mono Bucket not only is a solution for the Great Lakes, but potentially has broader applicability for wind system installations off the Atlantic and Gulf Coasts.

The University of Maine aims to install a pilot floating offshore wind farm with two 6-megawatt direct-drive turbines on concrete semi-submersible foundations at a test site off Monhegan Island, Maine. Because of its location in deep water, where traditional foundations are not feasible, the university is developing an innovative floating platform.

The University of Maine has demonstrated a 1:8-scale prototype of its floating VolturnUS foundation and has applied the knowledge gained from designing, constructing and deploying the prototype to the engineering efforts of a full-scale design. The university and its partners have focused on commercial-scale manufacturing of the foundation and reducing costs—considerations that DOE says have led to significant reductions in the internal steel requirements and significantly improved the manufacturability of the foundation.

By posting a comment you confirm that you have read and accept our Posting Rules and Terms of Use.
Advertisement
RELATED ARTICLES
This Giant Crane is Building an Offshore Wind Farm
These 3 Reports Highlight US Wind Energy Trends
Watch: Floating port/installation vessel to streamline offshore wind development
Technology Innovation Cuts Offshore Wind Project CapEx by 30%
Retirement for First Offshore Wind Farm
Advertisement