A City Car for the Masses

A concept car unveiled in Beijing in April 2016 is intended to demonstrate the potential for compact ultra-efficient urban transport, and differs in several key respects from what previously was involved in such vehicles.

For a start, the vehicle was developed not by an established car maker but by a combination of three other companies: global lubricants supplier Shell, Swiss-based engine developer Geo Technology and UK automotive design consultancy Gordon Murray Design. More pertinently, it did not use experimental or futuristic technologies but a number of proven techniques for fabricating and powering automobiles – most obviously a petrol-driven internal combustion engine.

Nevertheless, the vehicle, which takes its name – the Shell Concept Car – from the first of that trio, can claim some exceptional figures for its expected performance. Perhaps the most striking is its independently tested basic fuel consumption figure of 107 miles per UK gallon (89.1 miles per U.S. gallon) at a steady 45mph. 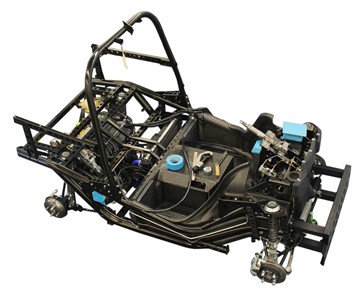 The car is a three-seater “city car” type vehicle with a central driver's seat and two passenger seats behind it. But this was not achieved by the use of exotic materials or complex manufacturing techniques that add to the cost elsewhere. Instead, it is claimed that the total through-life costs for a production equivalent of the vehicle would be 34% less than for a typical “city car” counterpart currently found on the roads of the UK.

In appearance, though, the car – developed in an initiative called Project M – is perhaps slightly unconventional. It is a three-seater “city car” type vehicle with a central driver's seat and two passenger seats behind it. It is also unusually tall and thin: 8.2-ft long, 5.2-ft tall and 4.4-ft wide. But despite this configuration the effectiveness of its streamlining means it has a drag coefficient of 0.297 and it weighs 550kg.

(Watch a video of the concept car.)

Its low weight derives in large part from the fact that its actual structure uses a concept developed by Gordon Murray Design called i–Stream. According to design director Andy Jones the approach – known formally as the Stabilised Tubular Reinforced Exoframe Advanced Manufacturing System – makes use of thin-walled steel tubing stabilized by “composite core” panels bonded to the inside of the frame. The combination of the two, he says, constitutes the “primary structure” that provides both the basic stability of the vehicle and crash protection for the occupants.

This technique, Jones says, provides comparable performance to a full composite structure but at much reduced cost and without the problem of managing the “point loads” that occur with that alternative approach. The internal panels used in the Shell Car comprise two carbon skins sandwiching a recycled paper core with a total thickness usually around 20mm, though more conventional single layer carbon fiber reinforced composite panels one-twentieth as thick are used to fashion the exterior of the vehicle.

The technique is not yet in use in any production vehicles although Jones says that Gordon Murray Design is working with a number of vehicle makers (including Japanese firm Yamaha and UK sports car manufacturer TVR) to bring it to the market. Intriguingly, he says that one of the projects with Yamaha involves a hybrid city car with a similarity in size to the Shell Concept vehicle.

Jones also says that the cooperation between the three development partners that the project required is evident in several details of the exterior styling of the vehicle that are particularly pertinent to its aerodynamic efficiency. One such, he says, is that the design dispenses not just with obvious causes of drag such as protruding wing mirrors which have been replaced by a rear view camera system, but also any openings in the front of the vehicle – there is, for instance, no conventional radiator grille. Instead, air intake occurs through a scoop located in the mid-section of the underbody of the car underneath one of the rear seats. 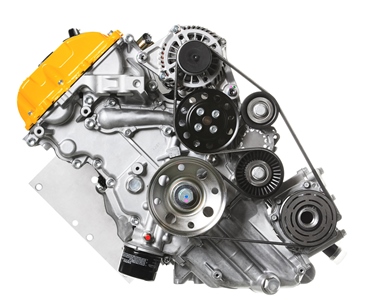 According to Hidehito Ikebe, director of engineering at Geo Technology, enhancements include reducing the contact area between cylinder and piston by 40% and cutting the number of piston rings from three to two. In consequence, the inertial mass of each piston has been reduced by 30%. There has also been extensive use of “diamond-like” carbon as a surface coating material within the engine including on the piston rings, camshaft and tappits.

Nevertheless, as with any internal combustion engine the seemingly prosaic issue of appropriate lubrication remains a factor in overall performance. In the case of the Shell Concept Car the approach adopted is explained by Bob Mainwaring, Shell Lubricants innovation technology manager, who works in the UK. It was, he says, to be as much as possible “close to the edge but safe.” In practical terms, that meant “reducing friction as far as possible, overstepping slightly and then coming back a bit” so that an effective compromise was reached which achieved both minimal friction and acceptable durability.

In practice, Mainwaring says, a lubricant achieves this objective through three aspects of its composition: its base formulation, the addition of “long polymer chain molecules” that act as viscosity modifiers and the inclusion of further additives that enhance cleanliness, anti-wear and friction reduction. In the case of the Shell Concept Car he says that though the lubricant formulation it uses is unique to it all of the constituent materials are drawn from existing standard products – the base fluid being Shell's own PurePlus product and the additives bought in from external suppliers. The lubricant itself has a viscosity range of 0W-12, which in effect means that not only does it have a very low viscosity at low temperature but that as the temperature increases its viscosity does not decrease as markedly as would be the case with existing commercial products.

The result, Mainwaring says, is that the Shell Concept Car achieves CO2 emissions that are 35gm/km lower than a comparable city car. Of this saving the engine redesign and use of appropriate lubrication are responsible for saving 4.7gm/km each with the remainder made possible by lightweighting and streamlining the vehicle. In terms of total through-life energy consumption, the figures he provides may be even more startling. The project team, he says, has calculated that the Concept Car would have to be driven more than 100,000 kilometers before the total energy involved in both that usage and its manufacture equals what was required to build and deliver to a customer's doorstep a conventionally built sports utility vehicle.

By posting a comment you confirm that you have read and accept our Posting Rules and Terms of Use.
Re: A City Car for the Masses
#1

Maybe it is time to revisit the car safety regulations. Cars today are several hundred pounds heavier now than cars were in the late 20th century with little safety improvement.